Mack Horton of Australia swam in the third lane at Nambu University Municipal Aquatics Center for the FINA World Championships in Gwangju, 330 kilometers south of Seoul, while the Chinese star Sun Yang was training in Lane 4. They're gearing up for the start of the swimming competition on Sunday. 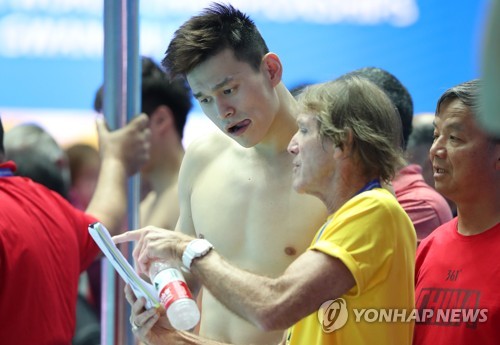 Chinese swimmer Sun Yang (C) speaks with his coach Denis Cotterell before the start of his training for the FINA World Championships at Nambu University Municipal Aquatics Center in Gwangju, 330 kilometers south of Seoul, on July 17, 2019. (Yonhap)

With Horton and other Australians occupying the third lane, Sun's Australian-born coach, Denis Cotterell, moved his pupil to Lane 5. Sun later returned to the fourth lane.

Sun arrived in South Korea earlier in the week under the cloud of allegations that he destroyed vials of his blood sample from an out-of-competition test. The nine-time world champion was cleared to race here by FINA in January, but the World Anti-Doping Agency (WADA) has appealed that decision to the Court of Arbitration for Sport.

Sun is going for his fourth consecutive world title in the 400m freestyle, and Horton will try to recapture the glory from the 2016 Rio de Janeiro Olympics, when he defeated the Chinese for gold in the 400m free.

Horton remains the only swimmer in the past eight years to defeat Sun in the 400m freestyle at a major competition.

Horton, who has publicly accused Sun of being "a drug cheat," has fallen on hard times of late. While Sun owns the fastest 400m freestyle time this year with 3:42.75, Horton is only ranked 15th with 3:46.47.

Their rivalry is perhaps more heated outside the pool at the moment, with Australia swimming head coach Jacco Verhaeren also chiming in and demanding "more transparency" from WADA and FINA regarding Sun's case. 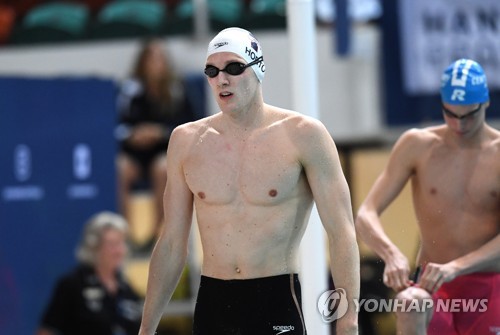