GWANGJU, July 18 (Yonhap) -- South Korea will compete in an artistic swimming final at the world championships for the first time in 10 years.

The host country's women's team finished 11th in the preliminary for free routine combination at the FINA World Championships at Yeomju Gymnasium in Gwangju, 330 kilometers south of Seoul, on Thursday. 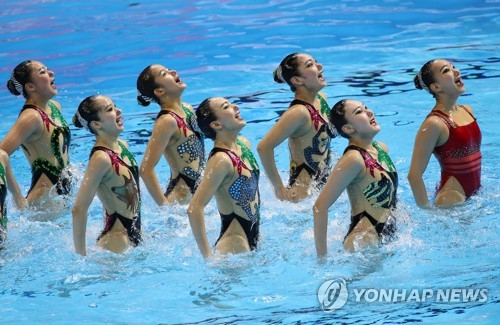 South Korean artistic swimmers perform during the preliminary of free routine combination at the FINA World Championships at Yeomju Gymnasium in Gwangju, 330 kilometers south of Seoul, on July 18, 2019. (Yonhap)

The top 12 are headed to Saturday's final. South Korea's 10 swimmers combined for 77.7 points, 0.3 points ahead of Hungary.

Russia topped the preliminary with 96.5667 points.

The last South Korean artistic swimmer to make a world championships final was Park Hyun-sun, who finished 12th in the solo free routine event at the 2009 worlds in Rome.

Performing a story from "The Jungle Book," South Korea scored 23.1 points in execution, 30.8 points in artistic impression and 23.8 points in difficulty.

South Korea had missed the finals in all previous events in artistic swimming, and this was the country's last chance to reach the medal round.

"Our goal was to reach the final in this event, and we wanted to focus on having fun," team captain Kim So-jin said. "We all enjoyed ourselves, and we're all happy that results came with it as well."

This was South Korea's world championships debut in free routine combination, a point of pride for the swimmers.

"It's really gratifying and I get chills thinking about it," said Lee Ga-bin, who portrayed Mowgli. "We watched a lot of clips together to prepare for our performance. I could feel we were getting tighter and tighter as a team."

China ranked second behind Russia with 96 points, followed by Ukraine with 94.3333.

Free routine combination joined the world championships in 2003, and Russia has won five of the eight gold medals awarded in the event so far.

With a medal likely out of reach, the South Koreans said they'll be happy to be in the final.

"The music is more upbeat than in other events, and I think it will draw better reaction from the crowd," said Koo Ye-mo. "Since this is our first final together, we'll try to have even more fun." 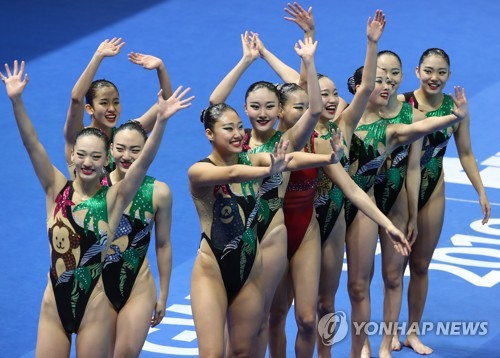 South Korean artistic swimmers wave to the crowd after performing in the preliminary of free routine combination at the FINA World Championships at Yeomju Gymnasium in Gwangju, 330 kilometers south of Seoul, on July 18, 2019. (Yonhap)