SEOUL, July 18 (Yonhap) -- North Korea's recent warning against the planned joint military exercise between South Korea and the United States is aimed at buying time to look into the idea of adopting a nuclear freeze as the beginning of denuclearization, a Seoul-based think tank said Thursday.

On Tuesday, North Korea's foreign ministry warned that the allies' joint military drill slated for next month could affect the prospect of working-level talks that leader Kim Jong-un and U.S. President Donald Trump agreed to resume at their surprise meeting on June 30.

"It seems like North Korea is trying to earn time to analyze and prepare a countermeasure to the U.S.' new way of calculation -- which views a nuclear freeze as the beginning of denuclearization," the Institute for National Security Strategy said in a release.

Last week, U.S. State Department spokeswoman Morgan Ortagus said a freeze "would be at the beginning of the process," signaling Washington's possible openness to adopting a step-by-step approach to the North's nuclear dismantlement.

The U.S. position in earlier negotiations with the North had centered on the regime dismantling all of its nuclear and missile facilities before receiving any sanctions relief in return.

Choi Yong-hwan, Vice President for the institute's Security Strategy Division, said the working-level talks could resume despite the warning if Pyongyang's intention is to use the issue as a bargaining chip.

"The important question is why North Korea took issue with the training at this moment, when it has been scheduled well in advance," Choi said during a press briefing.

"If (the North's decision) was discussed with China in advance, this deadlock will last for quite a long time, but if they want to use it as a bargaining chip, they would want to use it when it can be priced high, and that would not be after the training," Choi said.

The think tank said North Korea's negotiations team will likely be preparing a detailed plan to avoid repeating the failure they experienced at the Hanoi summit between Kim and Trump in February. 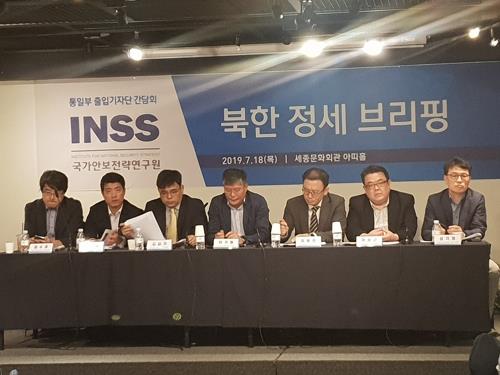