Kyung Da-seul and Lee Jung-eun had one goal apiece in the fourth quarter of a 22-2 loss to Canada at the FINA World Championships in Gwangju, 330 kilometers south of Seoul.

The fledgling team, formed barely a month ago for this competition, finished last in Group B with three losses. South Korea scored three goals and allowed 116 in the preliminary stage.

South Korea has been relegated to the 13th-16th place semifinals against South Africa on Saturday. The winners of the two semifinals will meet in the 13th place match, while the losing teams will square off in the 15th place game. 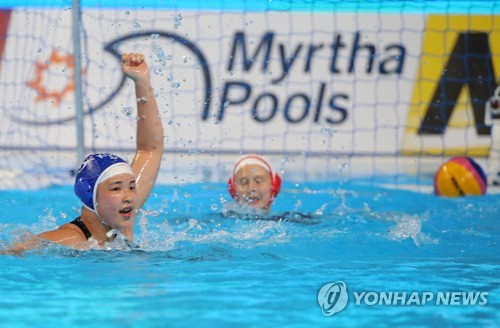 Kyung Da-seul of South Korea celebrates her goal against Canada during the teams' Group B women's water polo game at the FINA World Championships at Nambu University Water Polo Competition Venue in Gwangju, 330 kilometers south of Seoul, on July 18, 2019. (Yonhap)

South Korea dropped the first game against Hungary 64-0, the most lopsided game in the world championships history, and then scored its very first goal the next game in a 30-1 loss to Russia.

South Korea then faced a determined Canadian team that had dropped the first two group matches. Canada finished fourth at the previous worlds in 2017 and brought back 11 of 13 players from that team.

With such obvious gap in talent, the question wasn't whether Canada would win but by how many goals. 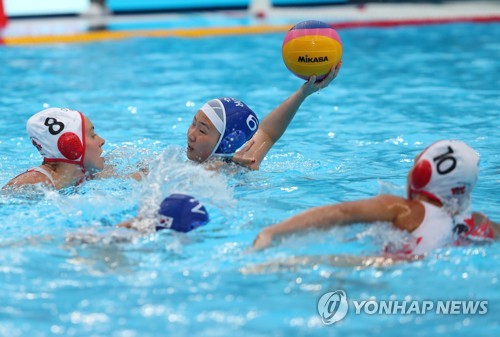 Canada opened the scoring 1:06 into the first quarter on a goal by Elyse Lemay-Lavoie and built a 5-0 lead in the first frame. It was the fewest goals South Korea has allowed in a quarter in the tournament.

And South Korea nearly scored in that first quarter, too, as Kyung Da-seul, who had the country's first-ever goal against Russia on Tuesday, hit the crossbar in the late moments.

Kyung Da-seul had another close call with about 40 seconds left in the second quarter, when she had a shot deflect off a hand and land just short of the net. Canada went into halftime leading 11-0

Lee Jung-eun also found the woodwork with her shot about 90 seconds into the third quarter, but Canada went up 17-0 through three frames.

In Canada's first two possessions of the fourth quarter, goalkeeper Claire Wright took the ball all the way into the offensive zone, leaving the net behind her wide open.

On the second such play, Wright was sent off for a foul, leaving Canada a player short. The defense scrambled to get back and protect the net, but Kyung found an opening and got her second goal of the tournament to make it 17-1 with 6:04 left in the match.

And just 28 seconds later, Lee Jung-eun found the back of the net for South Korea's first multi-goal performance.

Canada went to a new goalkeeper, Jessica Gaudreault, for the late stretch, and she continued to swim out of her position to join the attack. One South Korean player snuck out into the Canadian zone for a potential fast break, but South Korea failed to take advantage again. 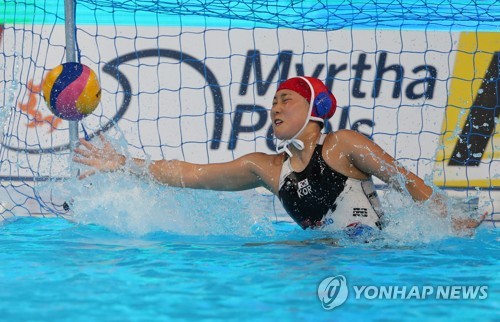