SEOUL, July 19 (Yonhap) -- A rancorous diplomatic spat between South Korea and Japan is casting doubts over the fate of a military intelligence-sharing pact seen as a rare symbol of their trust and a key platform for trilateral security cooperation involving the United States.

The tussle that started from a simmering row over Japan's wartime forced labor has been escalating into the economic domain with Tokyo's July 4 measure to tighten restrictions on exports to South Korea of key industrial materials.

It is now feared to be spilling over into the security realm, apparently putting Washington on edge as the U.S. is keen on firming up cooperation with its two Asian allies to promote regional stability amid North Korea's lingering threats and China's growing assertiveness.

The General Security of Military Information Agreement (GSOMIA) between Seoul and Tokyo is automatically renewed every year unless either side expresses its intent to rescind it 90 days ahead of the end of its extendable one-year period.

In a sign that the current row with Japan could affect the GSOMIA, South Korea's top presidential security advisor, Chung Eui-yong, briefed leaders of political parties Thursday that Seoul can review whether to renew it "depending on the situations," according to a lawmaker who attended the meeting hosted by President Moon Jae-in. 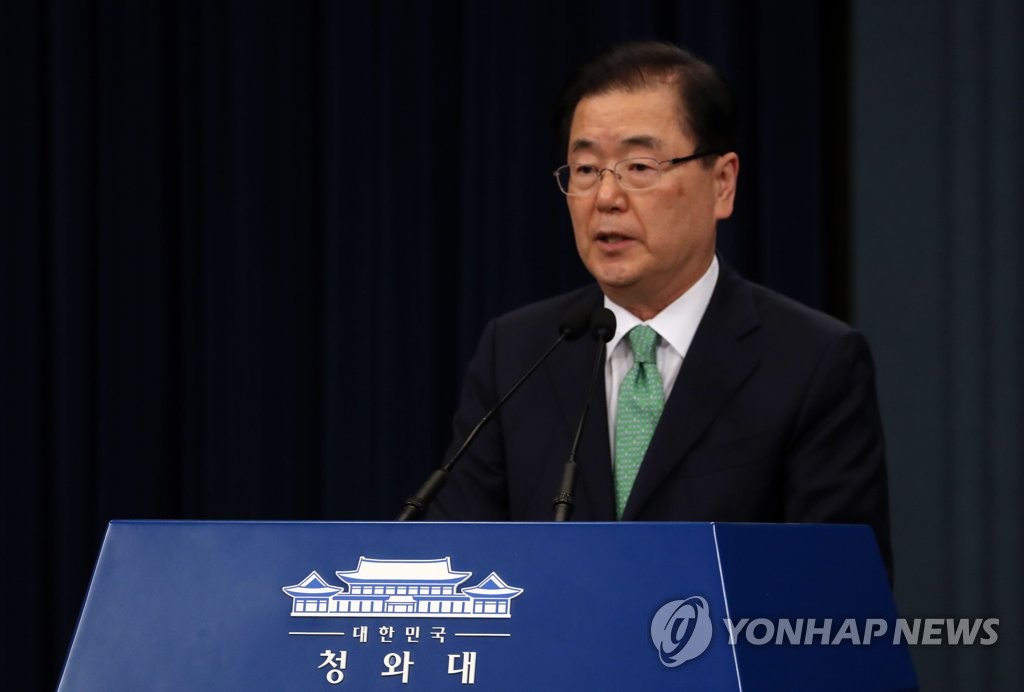 Seoul's defense ministry said Friday that Seoul's current stance is to keep the GSOMIA, and that it is looking at the pact from the standpoint of "its utility and security cooperation" with Tokyo.

Should Seoul or Tokyo want to terminate the GSOMIA, it would have to make a decision by Aug 23. Any move to jeopardize the pact is likely to unnerve Washington and put to the test its ability to mediate, analysts said.

In an email answer to a question from the Voice of America (VOA) on Thursday, the U.S. State Department said it "fully" supports the GSOMIA, stressing the importance of the ability to share information about "common threats."

"The ROK-Japan GSOMIA is an important tool in our shared efforts to maintain peace and security in the region and achieve the final, fully verified denuclearization of North Korea," the department was quoted by VOA as saying. ROK stands for South Korea's official name, Republic of Korea.

"The United States fully supports the ROK-Japan GSOMIA, which demonstrates the maturity of the bilateral defense relationship and improves our ability to coordinate trilaterally."

Chung's mention of the GSOMIA could be meant to note the need for active U.S. engagement to reverse Tokyo's export restriction, which Seoul sees as a politically driven retaliatory move in response to last year's top court rulings over Japan's wartime forced labor.

During his visit to Seoul on Wednesday, David Stilwell, the top U.S. diplomat for East Asian affairs, said that the U.S. will do "what it can" to support the efforts to resolve the spat between its allies.

Seoul and Tokyo signed the GSOMIA in November 2016 after a 2012 attempt to clinch the pact failed due to resistance from those opposing any military engagement with Tokyo due to historical resentment stemming from Japan's 1910-45 colonization of the peninsula.

The signing came amid the growing need for security cooperation between South Korea and Japan following North Korea's nuclear and missile provocations and its menacing rhetoric.

The signing itself marked a shift for the better in the checkered relationship between two countries that have been plagued by a series of feuds over Japan's wartime atrocities, including its sexual slavery, and its claim to South Korea's easternmost islets of Dokdo.

The two sides' intelligence cooperation has been mutually complementary, as Seoul has North Korea-related intelligence based on various sources, allegedly including its clandestine operatives based inside the communist state, while Tokyo boasted of its military satellites and other high-tech equipment.

Japan has in particular wanted to ensure that it has a credible, stable source of intelligence on the North's military movements to ensure the safety of its own nationals in South Korea and curb any security threats to its territory, observers said.

Intelligence cooperation between the two sides has long been encouraged by Washington, which has long been frustrated over a lack of traction in its push to bring its key security treaty allies together to confront shared security challenges in the region and beyond.

"Should the GSOMIA unravel, the U.S. would take it very seriously as it believes the pact is a symbolic institutional tool for trilateral security cooperation in countering the North's threats and keeping an assertive China in check," said Park Won-gon, a professor of international politics at Handong Global University.

The need for intelligence cooperation over the North's threats appeared to have decreased as Seoul has pushed for inter-Korean rapprochement, arms control and trust building despite there being little visible progress in Pyongyang's denuclearization process.

"Some may think that the GSOMIA is expendable as they would think it is not necessary should inter-Korea relations improve," said Nam Chang-hee, a professor of international relations at Inha University. "There could be a growing tendency to underestimate the importance of the GSOMIA while a peace process is under way."

Observers also said that given that both Seoul and Tokyo have publicly stated that security is separate from their ongoing diplomatic and trade spats, they would seek to retain their platform of security cooperation.