It was the shortest time a Disney film has drawn more than 2 million people in South Korea, according to the Walt Disney Company Korea.

It took eight days for the "Beauty and the Beast" to attract more than 2 million viewers in 2017 in South Korea. For "Aladdin," it took 11 days. 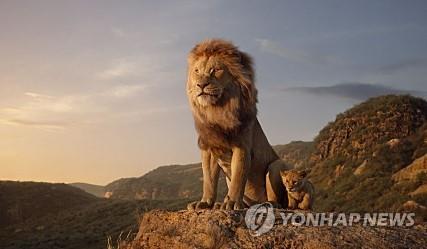 "The Lion King" is a photorealistic, computer-animated remake of the 1994 Disney animated musical drama of the same title.

It is one of the most anticipated films of the summer peak season and forecast take over the top spot at the Korean box office from its Disney sister movies "Spider-Man" and "Aladdin," which have dominated the movie chart for weeks.

"Aladdin," which was released on May 23 here, has sold a total of 10.74 million tickets to become the fourth most-watched foreign film ever in South Korea.
(END)