SEJONG, July 22 (Yonhap) -- South Korea's exports are likely to extend their slump to an eighth month in July, driven by a decline in outbound shipments of semiconductors and petrochemical goods, data showed on Monday.

The country's exports fell 13.6 percent in the first 20 days of July from a year earlier to US$28.3 billion, according to the data compiled by the Korea Customs Service.
Average daily exports -- which reflect working days -- declined 16.2 percent on-year to $1.71 billion.

If the trend continues, it would mark the eight month in a row that South Korea's outbound shipments have fallen on a yearly basis.

South Korea's exports fell 13.5 percent on-year to $44.18 billion in June, extending their on-year decline for the seventh consecutive month amid the prolonged trade row between the United States and China -- the world's top two economies -- and a drop in chip prices.

Hong Nam-ki, minister of economy and finance, said in a meeting with officials of the ruling Democratic Party that South Korea should not let its guard down, citing slowing exports and investment.

By product, exports of semiconductors and petroleum products fell 30.2 and 15.6 percent, respectively.

Outbound shipments of passenger cars and wireless communication devices, on the other hand, rose 19.5 percent and 7.2 percent, respectively.

By destination, South Korea's exports to Vietnam and Singapore rose 8.7 percent and 0.9 percent, while shipments to China and the United States -- the country's top two trading partners -- fell 19.3 percent and 5.1 percent, respectively.

South Korea imported goods worth $28.7 billion in the 20-day period, down 10.3 percent from a year earlier. 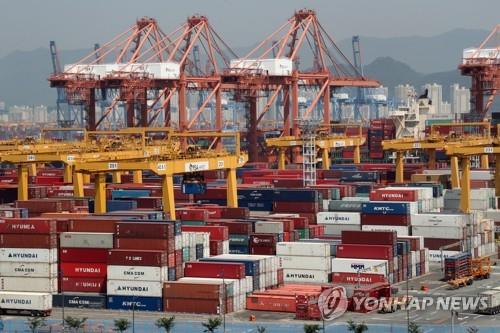