After the 7:33 a.m. accident in the city of Samcheok, Gangwon Province, the four were transported to a hospital in a state of cardiac arrest, with three people in critical condition and the six others slightly injured.

The van, with the 16 people, including seven foreigners on board, entered a right curve on a downward slope before veering off the road and rolled over the guard rail on the left side. The whereabouts of three of the seven foreigners are unknown, the police said.

The police said the people were heading to a field to seed with chives after leaving Hongseong, South Chungcheong Province, earlier in the day.

The police are investigating the cause of the accident and looking into whether they fastened their seat belts and whether the vehicle was overcapacity. 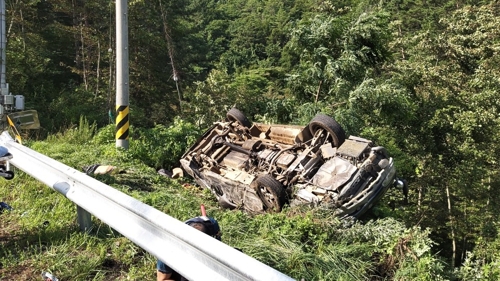