The sailors of the 4,400-ton Kang Gam Chan destroyer participated in the maneuvers taking place at the southern port of Jinhae, according to the Navy.

The training focused on helping the sailors learn survival swimming skills and techniques, including how to swim under combat or unusual situations such as through surface debris and rough seas, the Navy said.

Later in the day, they will also practice how to abandon their ship in any contingency and seek ways to survive by maximizing the use of equipment and cooperating with comrades.

The drills took place before the sailors were to be dispatched to waters off Somalia as part of the Cheonghae Unit for a six-month anti-piracy mission, the Navy said.

Also on Monday, sailors from the 4,400-won Munmu the Great conducted regular damage control drills in Jinhae under a scenario where a fire on their vessel causes hull damage. They are to learn skills on how to bring the fire under control and carry out pipe patching and dewatering operations.

"We've striven to boost sailors' capabilities to survive and reconstitute combat readiness in the case of an emergency to further strengthen our optimum combat power," Capt. Lee Gwang-soon said.

As part of related efforts, the Navy has been working on the damage control system for naval vessels, training manuals and the efficient management of personnel for those operations, among other things, the Navy noted. 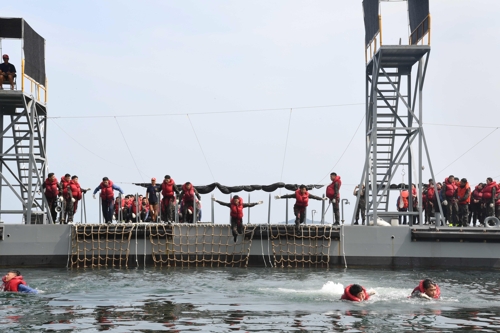