SEOUL, July 22 (Yonhap) -- Defense Minister Jeong Kyeog-doo visited an Army command near Seoul on Monday in the wake of a series of incidents that highlighted lax discipline in the military and prompted opposition parties to demand his resignation.

The Ground Operations Command, located in Yongin, southeast of Seoul, was the first destination of his tours to key armed services headquarters this week, which will also take him to the Navy, the Air Force and the Marine Corps operations commands.

The minister stressed the seriousness of the current situation and urged officers to "thoroughly carry out duties to further tighten discipline and maintain a strong readiness so as to win back public trust," according to a ministry official.

The military has been criticized for operational failures and lax discipline over several incidents in recent weeks, including the undetected arrival of a wooden boat carrying four North Koreans at a South Korean eastern port in June and a conscript's false confession forced by his superior officer during a manhunt case earlier this month.

On Friday, President Moon Jae-in said he felt responsibility for those cases and ordered top commanders to take stern countermeasures to prevent any recurrence. 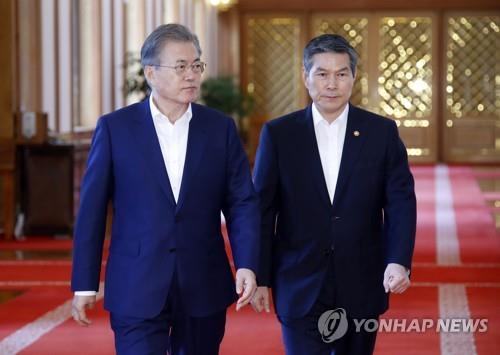