SEOUL, July 24 (Yonhap) -- South Korean drugmaker Samsung Bioepis Co. logged a sharp increase in its sales of its key biosimilar products in the European market in the first half, with combined revenues from its signature biosimilars, including Imraldi, nearing US$340 million, industry data showed Wednesday.

According to the earnings report by the U.S.-based Biogen Inc., the sales of Benepali, Flixabi and Imraldi in the January-June period came to US$358.6 million.

For the second quarter alone, Samsung's biosimilar revenues increased 44.9 percent on-year to $184 million, driven by sales of Imraldi, a copy of a drug made by AbbVie Inc. and used to combat various immune diseases.

Biogen said sales of Benepali, a biosimilar based on Enbrel, developed by U.S.-based Amgen Inc., reached $120 million for the quarter, a gain of 4 percent on-year. The drug is used in the treatment of rheumatoid arthritis, psoriatic arthritis and axial spondyloarthritis.

The company said sales of Flixabi, used to relieve rheumatoid arthritis, Crohn's disease and ulcerative colitis, jumped by 50 percent from a year earlier to $17 million. The drug was originally developed by Janssen Pharmaceutical. 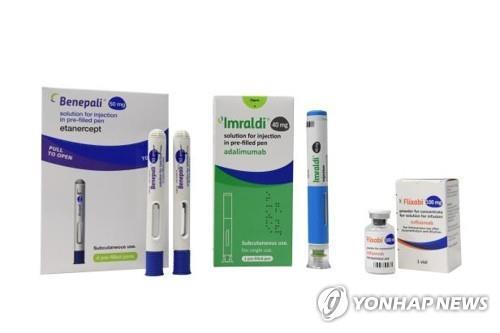 Samsung Bioepis racks up decent sales of biosimilars in Europe

Samsung Bioepis racks up decent sales of biosimilars in Europe