SEOUL, July 24 (Yonhap) -- President Moon Jae-in on Wednesday called for concerted national efforts to localize key industrial components and materials, and diversity their import sources to cope with economic difficulties caused by Japan's export restrictions and a trade conflict between the United States and China.

Moon also vowed to accelerate regulatory innovation to support new technological development and achieve the world's most innovative growth, while meeting with provincial governors and metropolitan city mayors in Busan.

"Our goal is to attain the most innovative growth in the world. For that purpose, we have to create an environment where the world's first new technologies are developed and commercialized," the president said at the meeting held at the southern port city's Nurimaru APEC House.

Referring to Japan's export curbs against South Korea, Moon again stressed sweeping regulatory reform to expedite the development of new technologies and the localization of components and materials. 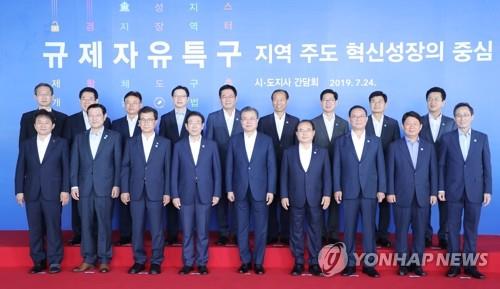 "Our mainstay industries are now in a difficult situation due to the U.S.-China trade dispute and Japan's export restrictions. It is a very grave situation that requires us all to join forces," Moon said.

"Localization of components and materials and diversification of their import sources are a challenging but unavoidable path to follow. We should also proactively cope with changes in the era of the fourth industrial revolution."

Moon has repeatedly called for the localization of industries since Japan began applying export curbs on South Korea for three key materials needed for the production of chips and displays on July 4 in apparent response to Seoul's handling of a wartime forced labor issue.

He then emphasized the support and role of provincial governments in the central government's efforts for regulatory reform and innovation.

Moon and the mayors and governors of the nation's 17 metropolitan cities and provinces now have met five times, with the Busan meeting held 11 months after the previous one last August.

The president said that his government implemented a regulatory sandbox system and a regulation-free special zone system this year in response to public and corporate demands for more sweeping deregulation. Moon's government has designated seven of the 17 provinces and metropolitan cities as being free of regulation in as many industrial fields. Under the policy, Gangwon Province was designated as regulation-free for digital health care, Daegu for smart wellness, South Jeolla Province for e-mobility, North Chungcheong Province for smart safety, North Gyeongsang Province for advanced battery recycling, Busan for blockchain technology and Sejong for autonomous driving.