Net profit for the April-June quarter rose to 645 billion won (US$550 million) from 553 billion won a year earlier, the company said in a statement.

"A sharply increased supply of high-end components for electric vehicles at home and abroad gave a boost to the quarterly results. A weaker won (against the dollar) also buoyed the bottom line," a company spokesman said.

In recent years, demand for electric car parts has been on the rise as carmakers, including Hyundai Motor Group, are in a race to strengthen their lineups with more competitive electric car models.

Hyundai Motor Group has added electric versions of the Kona subcompact sport-utility vehicle, the Ioniq, the Niro, and Soul boxcar to its lineup.

Hyundai Mobis received a total of 659.6 billion won worth of electric car parts orders globally in the second quarter, jumping 82 percent from 362 billion won a year earlier, it said.

Hyundai Mobis won $845 million worth of core auto parts orders from global carmakers, except its parent Hyundai Motor Group, in the first half, achieving 40 percent of its annual order target of $2.1 billion, the spokesman said.

Last year, Hyundai Mobis obtained $1.7 billion worth of parts orders, or 10 percent of its total car parts deals, outside the country. 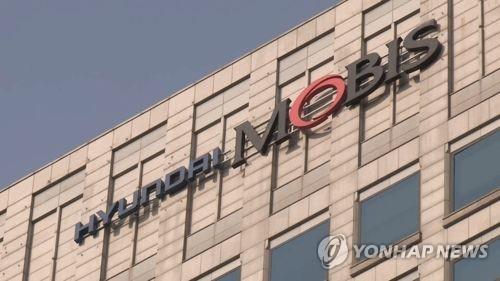