One missile flew around 430 kilometers and the other appeared to travel a bit farther based upon an analysis by the U.S. intelligence authorities, a JCS officer said, adding that both flew at an altitude of around 50 kilometers.

More analysis is needed to verify if they were ballistic missiles or not and whether they were the same type of short-range missiles that the North test-fired twice in May, according to the officer. 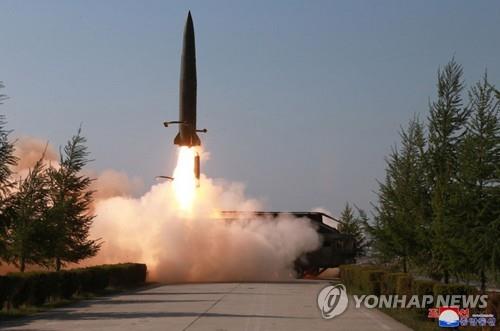 Given the flight range, Pyongyang on Thursday appears to have test-fired its version of Russia's Iskander ballistic missiles, just as it did back in May, according to experts.

Pyongyang has reportedly not responded to Washington's offer for dialogue. It has also called the U.S. and South Korea to cancel their combined military exercise slated for August, warning that the drill would affect ongoing efforts to resume its nuclear talks.

A diplomatic source here said, "More time is needed before working-level talks resume, though we need more analysis of the latest military actions."

Adding to uncertainty, North Korean Foreign Minister Ri Yong-ho is also reportedly unlikely to attend the ASEAN Regional Forum (ARF) to be held in Thailand early next month, though it has sent its foreign minister to the forum every year since 2003.

In response to Thursday's firing, South Korea's defense ministry called on Pyongyang "to stop such acts that do not help efforts for easing military tensions on the Korean Peninsula" and vowed to ramp up surveillance in close cooperation with the U.S.