SEOUL, July 25 (Yonhap) -- The South Korean economy is estimated to have expanded 1.1 percent in the second quarter, a dramatic turnaround from an unexpected contraction the previous quarter, partly afforded by increased government spending that offset a skid in private spending, central bank data showed Thursday.

The country's gross domestic product (GDP) expanded an estimated 1.1 percent from three months earlier in the April-June period, after backtracking 0.4 percent in the previous quarter, according to advance data from the Bank of Korea (BOK).

The estimate marks the highest on-quarter growth since the third quarter of 2017, when Asia's fourth-largest economy expanded 1.5 percent.

From the same period last year, the local economy grew 2.1 percent in the second quarter, also marking the highest growth since the last quarter of 2018, according to the BOK. 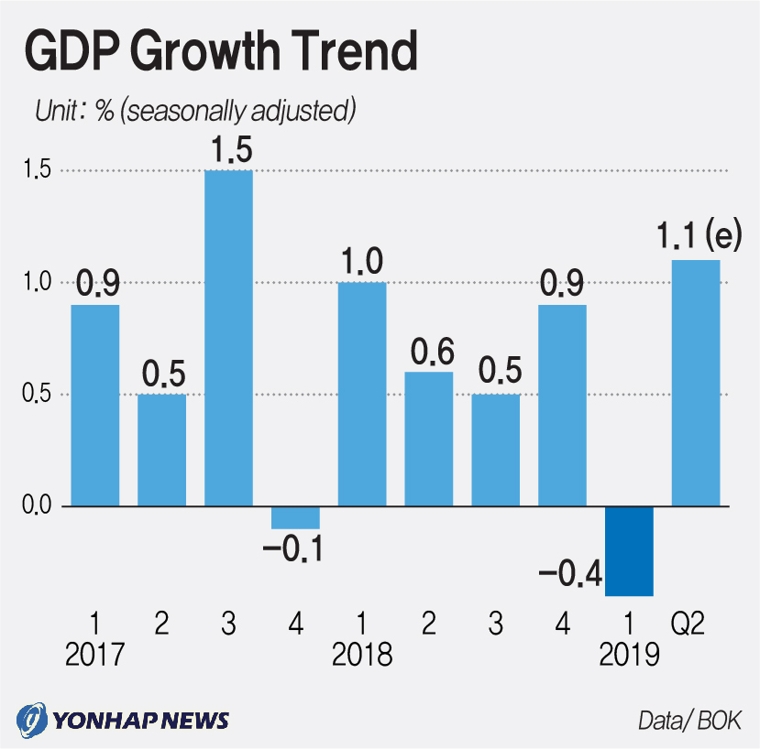 The upbeat data came as the central bank earlier slashed its annual growth outlook to 2.2 percent for the year from the 2.5 percent forecast three months earlier, citing prolonged trade tensions.

South Korea's exports have been on a steady decline since December, while its consumer prices continue to grow at below 1 percent and facility investment also has remained in the doldrums amid increased economic uncertainty.

Private consumption also picked up pace in the second quarter, growing 0.7 percent from three months earlier, compared with a 0.1 percent on-quarter increase in the first quarter.

The GDP growth in the second quarter, however, was largely attributed to increased government spending, which rose 2.5 percent from three months earlier and 7.3 percent from a year earlier.

The contribution of government spending to growth came to 1.3 percentage points in the second quarter, marking a sharp turnaround from a negative 0.6 percentage point three months earlier, according to the BOK.

"One of the key characteristics of growth in the second quarter is that the contribution of the private sector turned negative. Whether the contribution of the private sector will make a turnaround in the third quarter will be a key factor in whether the country's economic growth will accelerate," Park Yang-su, head of the BOK's economic statistics department, told a press briefing.

The BOK official added the large increase in government spending in the second quarter largely stemmed from delayed execution of government grants and subsidies provided to local district governments in the first quarter.

The government is currently seeking to further boost its spending with an extra budget of at least 6.7 trillion won (US$5.7 billion).

The central bank earlier forecast the local economy to grow 2.4 percent on-year in the second half, partly helped by increased government spending.

Park expressed some confidence that the country will likely meet its growth target, revised last week, but highlighted many uncertainties ahead.

"What we must keep in mind in the second half is that there are still many uncertainties, including the U.S.-China trade dispute and Japan's export restrictions," he said.

Tokyo began implementing tougher restrictions on exports of three key materials used to produce semiconductors and display panels to South Korea at the start of this month.

The move is widely expected to hamper South Korea's production of the two key export items down the road, which in turn may also affect the global supply chain.

Seoul has repeatedly asked Tokyo to withdraw its move but says Japan refuses to budge or even engage in any serious discussion on the issue.

On the production side, the GDP of the manufacturing sector added 1.8 percent from three months earlier in the second quarter, while that of the farming sector, including forestry and fisheries, dropped 3.7 percent.

The output by the utilities sector jumped 8.3 percent on-quarter.

Investment also expanded in the second quarter, apparently taking advantage of a low base from the first quarter.