Net profit for the world's No. 2 memory chip maker came to 537 billion won (US$455.8 billion) in the April-June period, plunging 88 percent from a year earlier, the company said in a regulatory filing.

Operating profit was the lowest in three years, far below the market consensus of 744.1 billion won, compiled by Yonhap Infomax, the financial arm of Yonhap News. 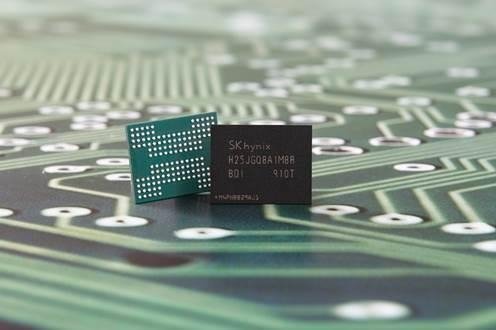 SK hynix said its dismal earnings were due to weaker-than-expected demand recovery and a steep fall in memory prices amid trade tension between the United States and China.

However, prices of DRAM and NAND products have continued to slide in the first half due to slow demand and a high level of inventory.

Shipments of DRAM, used for temporary data storage in PCs and servers, increased 13 percent in the second quarter from a quarter earlier, but the average selling price fell 24 percent over the period, the company said.

For NAND flash, memory mainly used for mobile devices, shipments increased by 40 percent on-quarter thanks to demand recovery, but the average selling price decreased by 25 percent.

The chipmaker said it will cut output of major memory prices and focus on high-density products to improve profitability.

"SK hynix plans to adjust production and investment flexibly to respond to the market conditions," the company said in a release.

The company said it will cut its DRAM production capacity starting in the fourth quarter and will convert part of its DRAM fab line in Icheon, east of Seoul, to CMOS image sensor (CIS) lines in the second half to foster new growth drivers.

SK hynix also plans to decrease the NAND wafer input by more than 15 percent this year, up from its earlier plan to decrease it by 10 percent.

The company said it will review the timing of the expansion of its two fab lines in South Korea and that it expects next year's capital expenditures will be "significantly lower" than this year.

SK hynix said it anticipated the high inventory level of memory chips to return to normal by the end of this year, helped by demand recovery and output cuts by major suppliers.

"We expect the supply glut of memory chips will ease in the third quarter and the inventory level and prices will stabilize in the fourth quarter," Cha Jin-Seok, the chief financial officer of SK hynix, said in a conference call.

The Korean tech firm also faces rising uncertainties on the trade front -- Japan began adopting stricter export rules on some key materials needed for making chips on July 4 amid a diplomatic row over the issue of wartime forced labor.

Although the measure hasn't affected production so far, SK hynix said it is ready for Japan's decision to remove South Korea from a list of trusted buyers, which would affect a broader range of high-tech materials.

"The company has secured as much as stockpiles as it can of some materials (imported from Japan), while diversifying sources and minimizing input required in production," Cha. "If (the Japanese export restrictions) are prolonged, we cannot rule out the possibility of the move causing the disruption in production. We will keep a close eye on the situation to take appropriate measures."

In the short term, the Japanese export curbs were a boon for SK hynix' shares, which rose 10 percent this month. Clients increased purchases of memory chips and analysts speculated that major chip makers may reduce output, which drove up chip prices.