SEOUL, July 25 (Yonhap) -- Kumho Asiana Group will sell airline unit Asiana Airlines Inc. and its two budget carriers in a packaged deal to a company that will be helpful for the future of the airline, a group executive said Thursday.

The group has been seeking to sell its entire 31 percent stake in Asiana Airlines, along with Air Seoul Inc. and Air Busan Co., and the auction was officially announced earlier in the day.

"We have the principle of selling Asiana Airlines and the two budget carriers in a packaged deal. We don't consider other options," Park Se-chang, president and CEO of Asiana IDT Inc., told reporters.

Park Se-chang is the only son of the former Kumho Asiana Group Chairman Park Sam-koo who stepped down as chairman of the group and CEO of Asiana Airlines in March after auditors rejected to approve the company's 2018 financial report.

In a public bidding notice, Credit Suisse, the sole manager for the deal, said it will send a prospectus to potential investors who have disclosed their intention to join the bid.

The airline stake up for sale is valued at 421 billion won (US$356 million) based on Thursday's closing price. If the management premium is added, the acquisition price reportedly could fetch over 1 trillion won.

Conglomerates, such as SK Group, CJ Group, GS Group, Hanwha Group and Aekyung Holdings, Inc., as well as private equity funds, have been mentioned as potential bidders for the country's second-biggest full-service carrier after Korean Air Lines Co., though they have denied the rumors or said they will look at the deal.

Asked if they planned to join the bid, Aekyung said it has "an interest" in the deal and GS said no decision has been made yet. Aekyung owns a 57 percent stake in low-cost carrier unit Jeju Air Co.

But SK, CJ, Hanwha said they have no interest in the auction. Korean private equity firm MBK Partners declined to comment.

In 2018, Asiana Airlines and its main creditor, the state-run Korea Development Bank (KDB), signed a deal that required the carrier to secure liquidity through sales of assets and other means.

The KDB-led creditors and Kumho Industrial have said they are planning to sell Asiana Airlines together with its two budget carrier units -- Air Seoul Inc., which is wholly owned by the airline, and 46 percent owned Air Busan Co.

But they left the room for the possibility that Asiana and the two low-cost carriers could be sold separately if such a request arises during the bidding process.

Last year, the airline swung to a net loss of 10.4 billion won from a net profit of 248 billion won a year earlier due to currency-related losses and increased jet fuel costs.

Currently, it owes financial institutions a total of 2.7 trillion won in short-term obligations, with 660 billion won of loans maturing this year. 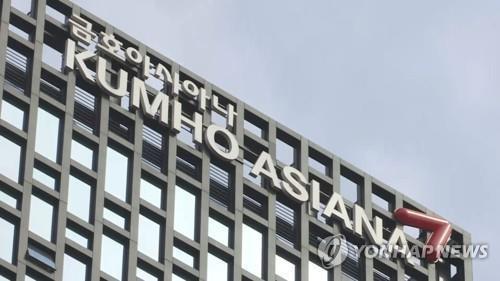