Park was indicted in January 2018 on charges of accepting 3.5 billion won from three chiefs of the National Intelligence Service (NIS) from May 2013 to September 2016 in collusion with her secretaries and sentenced by the Seoul Central District Court in July of the same year to six years in jail and a forfeit of 3.3 billion won. At that time, the district court acquitted Park of bribery and applied a charge of loss of state funds in determining her sentence.

But the Seoul High Court reduced Park's prison term and forfeit by one year and 600 million won, respectively, by acquitting her of part of the state fund loss charge and applying a charge of embezzlement instead. 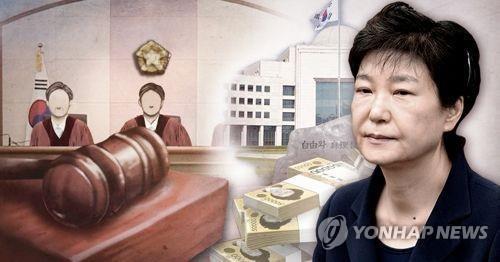 As for the partial acquittal, the Seoul High Court said the NIS chiefs accused of handing their off-the-books funds to Park cannot be regarded as accounting officials stipulated by the laws on the loss of state funds.

"The defendant's sentence was determined within the guideline set by the Supreme Court's Sentencing Commission. In particular, it was also taken into consideration that the defendant's acceptance of 3.3 billion won from three NIS chiefs is highly criticized," the Seoul High Court said.

Park was not present at Thursday's appellate court trial too, as she has been boycotting all her trials.

Following the ruling, some of Park's supporters expressed their grievances and complaints, while prosecutors said they will appeal to the Supreme Court.

With the latest ruling, the 67-year-old Park's aggregate prison terms imposed by local and appellate courts amounted to 32 years.

Following her ouster from the presidency in 2017, Park was sentenced to a 25-year prison term and a 20 billion-won fine after being convicted of power abuse and various corruption charges. The case is now pending in the Supreme Court.

Separately, the Seoul High Court sentenced Park to a two-year prison term last November on charges of illegally interfering in the then ruling party's candidate nominations ahead of the general elections in April 2016. The jail term was confirmed after both Park and prosecutors didn't appeal to the Supreme Court.

In April this year, Park filed for the suspension of her sentence, saying her health has badly deteriorated due to the lengthy detention. She was detained on March 31, 2017. But Seoul prosecutors dismissed her petition after examining her health and other conditions.