The firm signed a deal with the authorities of the city, located 260 kilometers southeast of Seoul, and the province.

"Amid Japan's continued export restrictions, confidence that 'we can do' has been confirmed again," he said, attending the signing ceremony in Gumi.

The Gumi agreement presents a "new breakthrough" in efforts to invigorate the local economy at a time of internal and external difficulties facing Asia's fourth-largest economy, he added.

The new facility, scheduled to be constructed by 2024, will produce cathode, a key material for secondary, or rechargeable, batteries, including those used in electric vehicle (EV) production.

It will have an annual production capacity of 60,000 tons, enough to make batteries for 500,000 EVs, according to the firm.

The project is part of LG Chem's plan to beef up its insourcing capability for key EV materials. Currently, the company only supplies 20 percent of the cathode material it needs, but it aims to increase that figure to at least 35 percent.

It is also in line with the company's plan to boost its battery business, which aims to achieve 31.6 trillion won in sales by 2024, up from last year's 6.5 trillion won.

Like a job-creation deal involving Hyundai Motor struck in Gwangju in January, the Gumi model paves the way for LG Chem to construct and operate the envisioned facility with a lower wage burden and fewer concerns about strikes. Local authorities will provide support for the welfare of workers, and there will be financial incentives from the government.

The Moon administration has campaigned for programs like this to be adopted more widely in a bid to boost domestic corporate investment, create jobs and revitalize regional economies.

The secondary battery market is projected to grow at an average annual rate of 16 percent or higher by 2025, with that of related materials and parts expected to swell by nearly 30 percent, Moon said.

"The government will also make utmost efforts for the success of Gumi-type job (creation)," he added.

He appealed to the National Assembly to pass a special bill on balanced national development in order to accelerate the expansion win-win job-creation programs.

"(The company) made the choice of domestic investment despite a very good offer put forward by another country," Moon pointed out, according to Cheong Wa Dae spokesperson, Ko Min-jung.

In particular, it came at a time of high public interest in the materials industry and provided people with reassurance, the president was quoted as adding.

South Korea's semiconductor and digital screen manufacture businesses have been hit by Tokyo's stricter control of exports of some high-tech materials in reprisal for historical and political issues. The measure took effect in early July and Japan is threatening to expand its export curbs against South Korea. 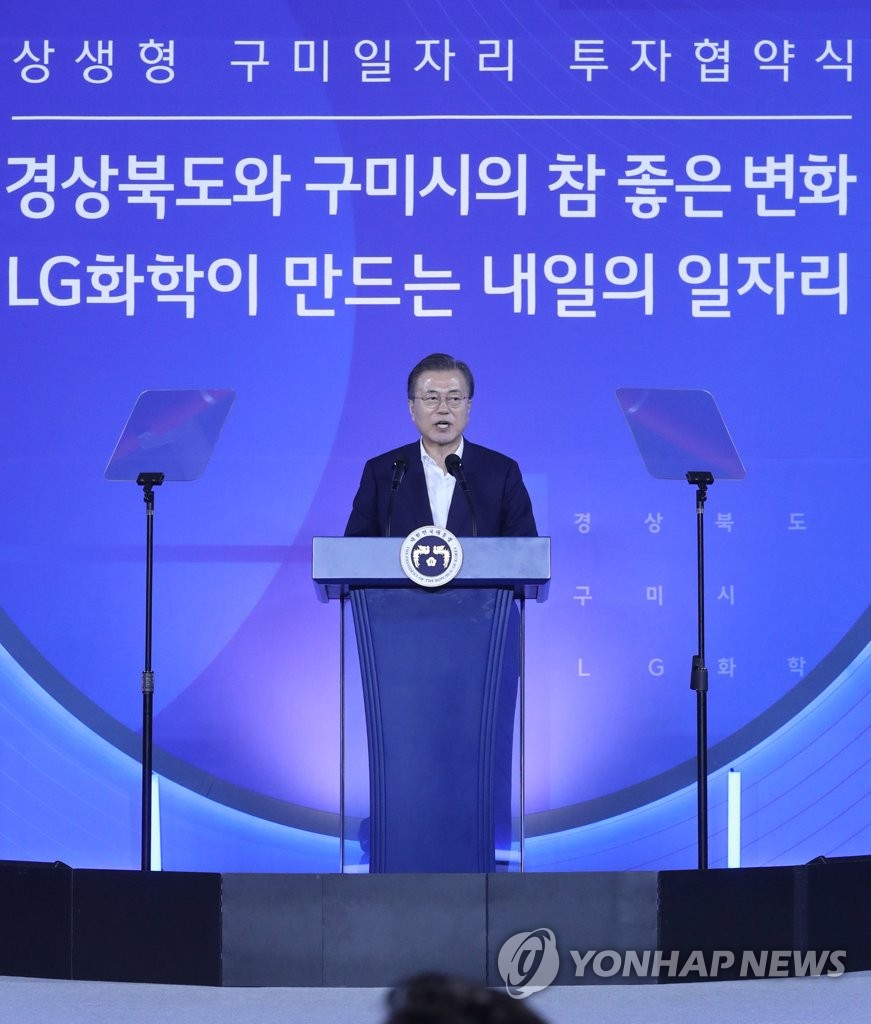