WASHINGTON, July 25 (Yonhap) -- The United States on Thursday insisted to continue its diplomacy with North Korea despite the communist state's new missile launches, apparently keeping hopes alive that the latest provocation would not derail efforts to resume nuclear talks between the two countries.

It raised questions about whether working-level talks could resume as agreed by U.S. President Donald Trump and North Korean leader Kim Jong-un during their impromptu meeting at the inter-Korean border on June 30.

North Korean launches of ballistic missiles are also banned under U.N. Security Council resolutions and a direct challenge to Trump's repeated claims that the regime has stopped missile and nuclear weapons tests under his administration.

But U.S. Secretary of State Mike Pompeo dismissed the latest provocation as a negotiating tactic.

"Everybody tries to get ready for negotiations and create leverage and create risk for the other side," he said in an interview with Bloomberg Television.

Asked if the working-level talks will be held next week, he said, "It will be in a couple of weeks, I anticipate."

Trump could argue that the North did not break its promise to stop long-range missile launches that threaten the continental U.S.

"President Trump has been incredibly consistent here," Pompeo said. "We want diplomacy to work. We want Chairman Kim to deliver on the promise that he made to President Trump, which is that he would denuclearize."

Also Thursday, the State Department said it remains committed to diplomacy although it wants the North to refrain from further provocations.

"We urge no more provocations," department spokeswoman Morgan Ortagus said during a press briefing. "This administration is committed to diplomatic engagement with the North Koreans, and we continue to press and hope for these working-level negotiations to move forward."

Robert Manning, a senior fellow at the Atlantic Council think tank, noted it is in Trump's interest to continue to engage North Korea, which he has touted as his foreign policy success, ahead of the 2020 presidential race.

"As long as North Korea does not test intercontinental ballistic missiles that can hit the U.S. or test nuclear weapons, Trump will pretend the policy is succeeding," Manning told Yonhap News Agency.

"While Trump would, of course, like to solve the North Korea nuclear problem, he appears willing to live with the status quo -- even though Kim is quietly continuing to work on his missile and nuclear weapons, as yesterday's tests show -- as long as the Korean Peninsula is on the surface, quiet through the 2020 reelection campaign," he said. 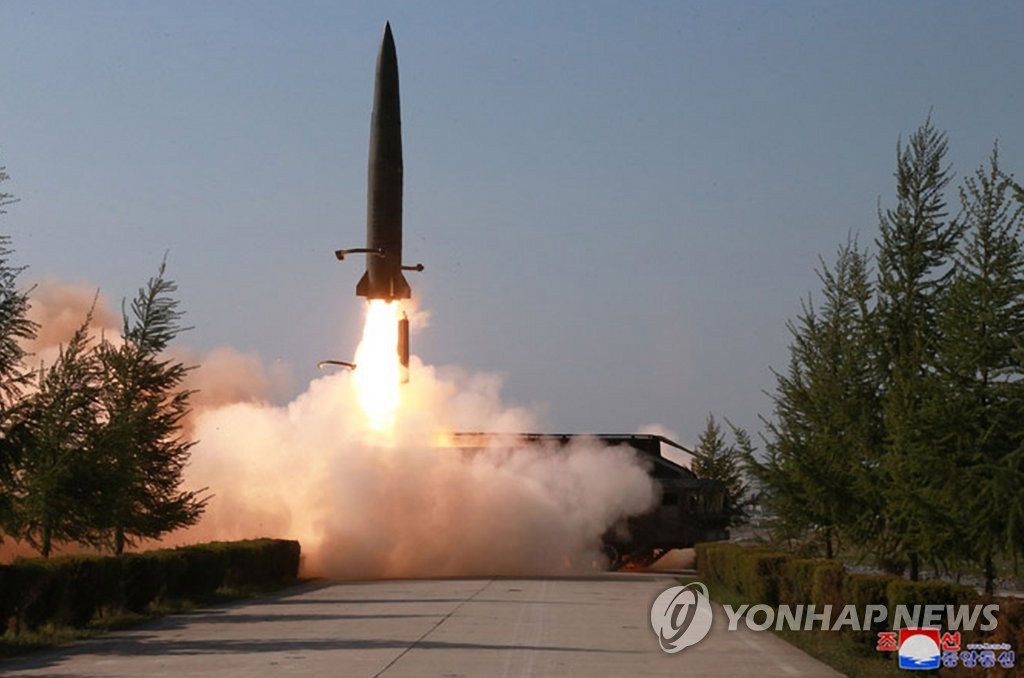 North Korea warned last week that the resumption of talks would be affected by whether Seoul and Washington go ahead with their joint military exercises scheduled for next month. The North has long denounced the drills as a rehearsal for invasion.

Manning said the tests may also have had some military value if they involved solid fuel missiles, which are more difficult than liquid fuel rockets to target pre-launch.

Trump has yet to comment on the latest launches. After the previous North Korean missile launches in May, he downplayed them as merely short-range and reaffirmed his confidence that Kim will uphold his commitment to denuclearize.

Frank Aum, a senior expert on North Korea at the U.S. Institute of Peace, said he expected the U.S. to react the same way it did to the May tests by ignoring the latest firings.

"I don't think it will derail negotiations in the long-term but it will likely take longer for the working-level negotiations to begin," he said.

Harry Kazianis, senior director of Korean studies at the Center for the National Interest, also held out a longer term timeline for any resumption of talks.

"For the time being, I don't see any viable path to any sort of talks for the foreseeable future," he said. "In fact, I see North Korea perhaps testing more missiles before joint drills begin and even more missiles after they end. Even under the best scenario, if North Korea is interested, I don't see any real substantive diplomacy with the North until the fall, at the earliest."

The launches drew fresh condemnation from both sides of the aisle in Congress.

Sen. Cory Gardner (R-CO), chairman of the Senate Foreign Relations Subcommittee on East Asia, tweeted Wednesday: "In response to this provocation, the administration should move to impose additional sanctions on North Korea and all of its enablers."

Sen. Ed Markey (D-MA), ranking member of the same subcommittee, said Wednesday that if the reports of the launches are true, they would amount to a violation of U.N. Security Council resolutions.

"And Trump, who confirmed this week that no working-level talks are ongoing, has been engaging in summitry with nothing to show for it," the senator tweeted. "North Korea is trying to pressure us into a bad deal."

Manning, from the Atlantic Council, questioned the North's seriousness about denuclearization, saying the exercises are a "convenient excuse."

"Recently, the U.S. has hinted at new flexibility on easing sanctions if progress on denuclearization occurs," he said. "The point of diplomacy is to test offers and ideas, explore counteroffers and find a balance of interests. So it is reasonable to ask, if Kim won't even do that, is he serious about denuclearization?"