WASHINGTON, July 25 (Yonhap) -- U.S. President Donald Trump said Thursday that North Korea hasn't tested missiles other than "smaller ones," in an apparent attempt to keep dialogue with the North alive despite its recent test-firing of short-range ballistic missiles.

Trump made the remark in an interview with Fox News a day after the North fired two short-range ballistic missiles, insisting that he gets along "very well" with North Korean leader Kim Jong-un.

"They haven't done nuclear testing. They really haven't tested missiles other than, you know, smaller ones, which is something that lots test," he said in his first public remarks on the launches. 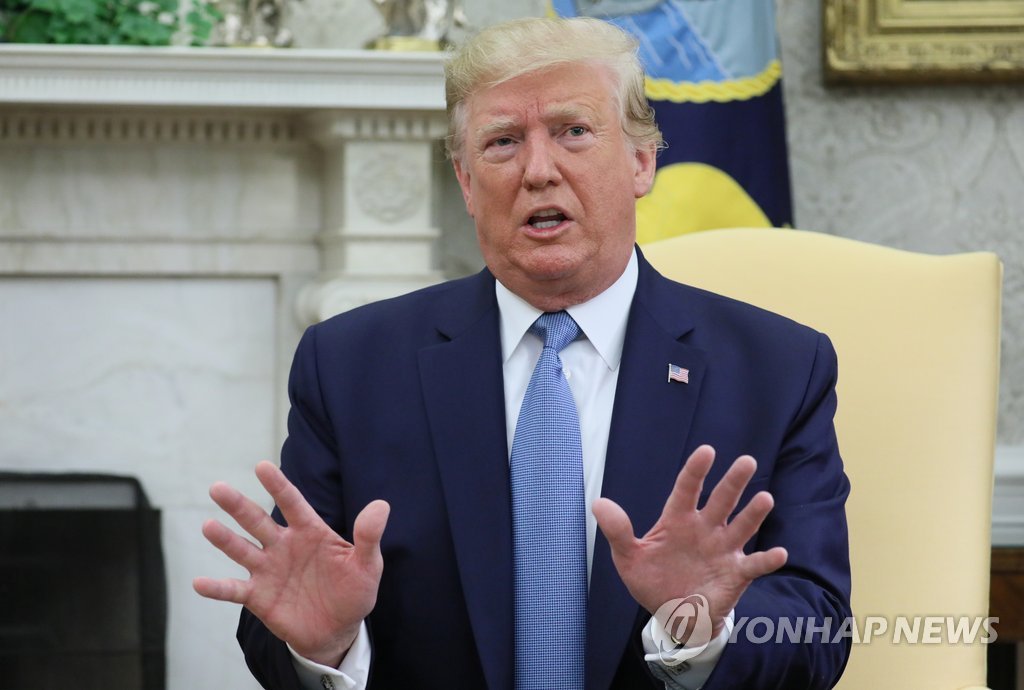 The provocation followed Trump's impromptu meeting with Kim at the inter-Korean border on June 30, during which the two agreed to restart working-level talks on dismantling the North's nuclear weapons program.

The last time North Korea launched short-range missiles in May, Trump also downplayed them in an apparent effort to salvage the diplomatic process.

For Trump, his engagement with North Korea, and its suspension of nuclear and long-range missile tests, has been one of his major foreign policy achievements ahead of his 2020 reelection bid.

"I think with North Korea, we've been doing very well, but that doesn't mean that's going to continue," he said in the interview.

"We'll see what happens, but I think what you said might be somewhat of an understatement," he said, referring to the interviewer's comments that he believes the U.S. military will respond strongly if pushed by either North Korea or Iran.

North Korea said the tests were aimed at sending a "solemn warning" to South Korea over its deployment of "ultramodern offensive weapons" and its continued plan to hold military exercises with the U.S. next month.

It had warned last week that the resumption of working-level talks with the U.S. would be contingent on the execution of the drills, which it condemns as a rehearsal for invasion.

Earlier in the day, U.S. Secretary of State Mike Pompeo brushed aside the launches as a negotiating tactic and said he expects the negotiations to resume in a couple of weeks.

"Everybody tries to get ready for negotiations and create leverage, and create risk for the other side," Pompeo said in an interview with Bloomberg Television. "We remain convinced that there's a diplomatic way forward, a negotiated solution to this."

In a separate interview with Fox News, he said: "I think this allows the negotiations to go forward. Lots of countries posture before they come to the table."

On the North Korean leader's recent inspection of a new submarine capable of carrying submarine-launched ballistic missiles, the secretary also aired his indifference.

"I went to a defense facility. We all go look at our militaries, and we all take pictures of them," he said.

The State Department said it remains committed to diplomacy although it wants the North to refrain from further provocations.

"We urge no more provocations," department spokeswoman Morgan Ortagus said during a press briefing. "This administration is committed to diplomatic engagement with the North Koreans, and we continue to press and hope for these working-level negotiations to move forward."

Trump and Kim agreed at their first summit in Singapore in June 2018 to work toward the complete denuclearization of the Korean Peninsula in exchange for U.S. security guarantees.

A second summit in Vietnam in February ended without a deal due to disagreement over the scope of North Korea's denuclearization and sanctions relief from the U.S.