"Differing from a general parabolic trajectory, the Iskander shows a complicated flight pattern and what North Korea fired yesterday showed a similar one," the officer noted.

It is the first time that the military authorities have officially offered such an assessment, though experts have said North Korea has tested its version of the Iskander, a ground-to-ground short-range ballistic missile, since May.

The two missiles were initially presumed to have flown 430 km and 690 km, respectively, but "further analysis conducted jointly with the United States showed that the missiles added the so-called pull-up maneuver in the dive phase," the officer said.

In the reentry phase, the Iskander pulls up to fly horizontally and then dives to attack its target with a near 90-degree falling angle, which aims to avoid interception, according to experts.

"Such a gray area is due to the curvature of the Earth, and North Korea's firing of the missiles northeastward from its east coastal region made the zone wider," the officer said, adding that if the weapon is fired southward, South Korean assets can detect it. 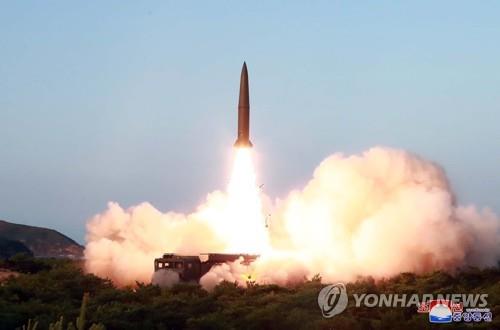 Asked if South Korea's defense ministry sees the latest firing as a violation of last year's inter-Korean military deal under which the two Koreas agreed to halt all hostile acts against each other, a ministry official said it does not ban the test-firing of ballistic missiles.

"We express strong regret over the firing, which does not help ongoing efforts for easing tensions on the Korean Peninsula," a ministry official said.

Despite North Korea's warnings against Seoul's introduction of new weapons and the planned joint military exercise with the U.S., the official said the command post exercise will be conducted as scheduled, and South Korean moves (of the weapons development) are to better counter evolving threats from North Korea."