Moon Chung-in, special presidential advisor for unification, foreign and security affairs, made the case amid a prolonged standstill in the talks between the North and the United States.

"If the North shows concrete progress (in its plan) for denuclearization, I believe an easing of the U.N. (Security Council) sanctions against the North is possible," he said at a forum held to mark the 30th anniversary of the establishment of Korea-Hungary relations.

"Preemptive dismantlement of its Dongchang-ri missile engine site and its launchers, then dismantling the Yongbyon nuclear complex in a verifiable manner, I believe concrete steps like these could lead to relieving of sanctions," he said.

That could also help restart the now-shuttered joint Kaesong industrial complex and tourism at Mount Kumgang in the North as well as other various cross-border economic exchanges envisioned by the president, Moon said.

Nuclear negotiations were deadlocked after the second summit between U.S. President Donald Trump and North Korean leader Kim Jong-un ended without a deal. The two sides failed to meet halfway over the scope of the North's denuclearization and the U.S.' sanctions relief. 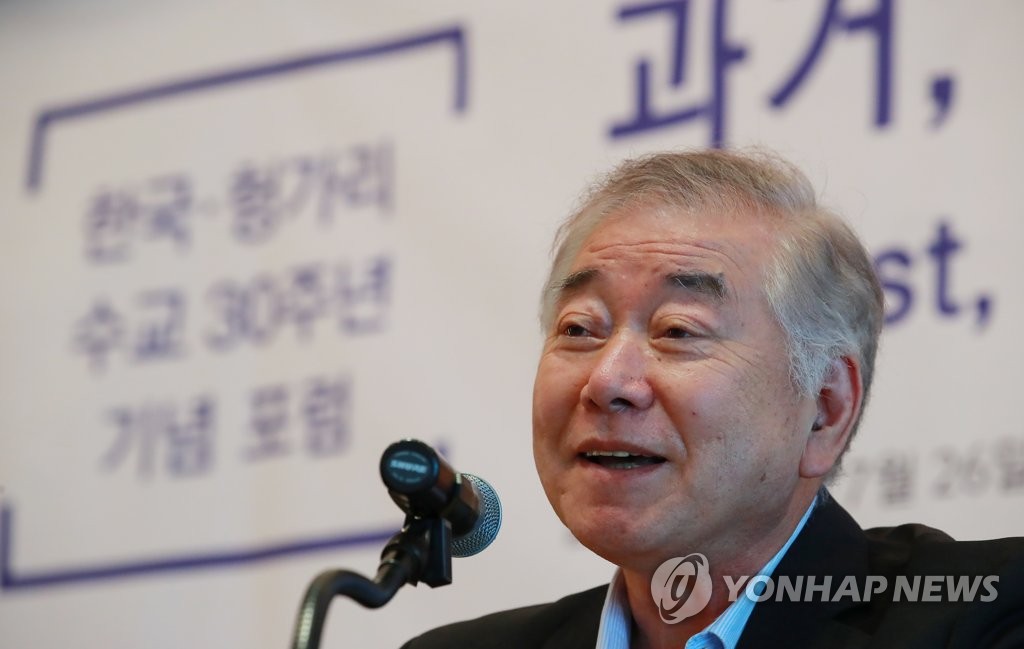 During the summit, Pyongyang sought major sanctions relief in exchange for the dismantlement of its Yongbyon facility. Washington wanted more before making such concessions.

Hopes for a resumption of dialogue were rekindled after Kim and Trump held a surprise meeting at the inter-Korean border on June 30 and agreed to resume working-level denuclearization negotiations.

North Korea, however, has raised uncertainty by firing two short-range ballistic missiles into the East Sea on Thursday in protest of South Korea's plan to hold its joint military exercise with the U.S. next month and buy offensive weapons from the ally.

Washington has reaffirmed its commitment to talks with the North. Secretary of State Mike Pompeo earlier said that the working-level talks could resume in "a couple of weeks."

The presidential adviser expected that preparations for the working-level talks between the U.S. and the North could start after the end of the exercise, saying that Pyongyang is also willing to keep the dialogue mood alive.

"The North basically wants to talk and the two leaders have agreed to talks. It's just always been a matter of under what conditions," he said, referring to Kim and Trump.