SEOUL, July 26 (Yonhap) -- North Korea threatened a "merciless" response to any enemy attacks Friday ahead of the 66th anniversary of the signing of the armistice that ended the 1950-53 Korean War.

Kim Su-gil, director of the General Political Bureau of the Korean People's Army, made the remarks during his speech at a meeting to mark the anniversary slated for Saturday.

"We have to launch merciless attacks to vigorously crush those who even dare to invade 0.001 millimeter of our holy sky, land, and sea," Kim said during the meeting aired by the North's state TV.

Kim also said Pyongyang will firmly guard the country's self-reliance in the face of international sanctions over its nuclear and missile tests.

The armistice was signed on July 27, 1953, leaving South and North Korea technically in a state of war. The North has designated the date as Victory Day.

North Korean leader Kim was not present at the Friday's meeting. 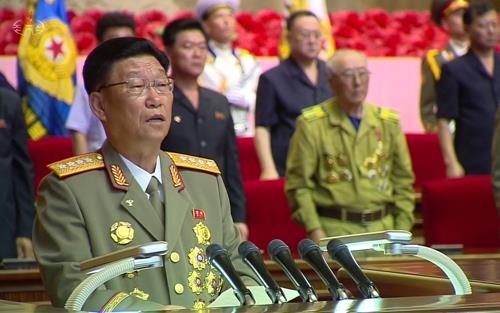