SEOUL, July 28 (Yonhap) -- A fishing boat apparently operated by North Korea's military has been towed into a South Korean port for investigation after "mistakenly" sailing across the inter-Korean sea border, the military authorities here said Sunday.

Three North Koreans, one wearing the communist nation's military uniform, were aboard the 10-meter-long wooden boat, according to the Joint Chiefs of Staff (JCS).

Asked initially if they have a desire to defect to the South, they said no, according to a source.

But the military took them to the port to figure out the exact reason for the NLL crossing. An interagency probe team is looking into the personal backgrounds of the North Koreans and their intentions.

The boat was first spotted sailing in waters 5.5 kilometers north of the Northern Limit Line (NLL) in the East Sea at around 10:15 p.m. on Saturday. Twenty-four minutes later, it started heading southward, moving at speeds of 2-5 knots and crossed the NLL at around 11:21 p.m., the JCS said. 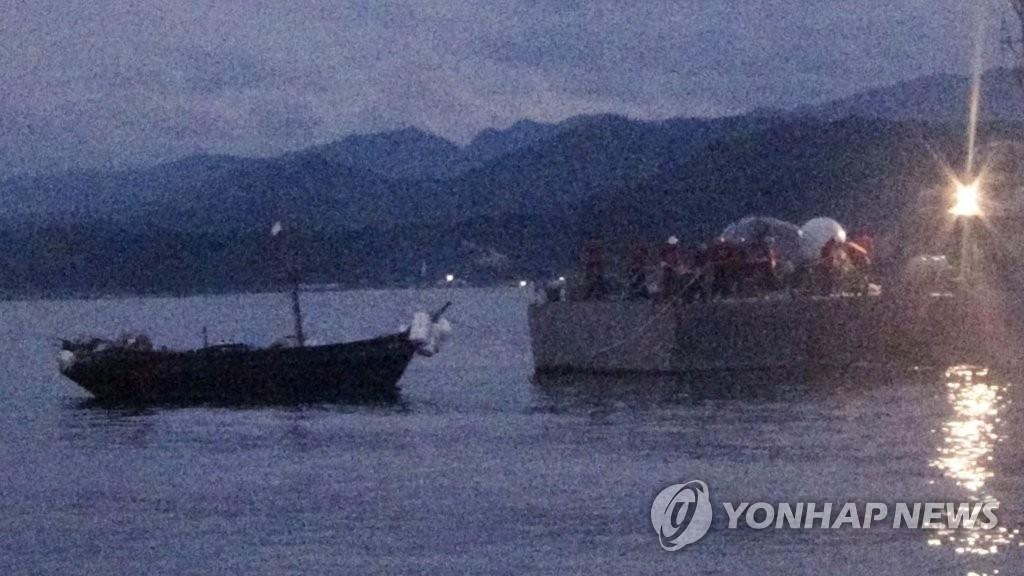 It was detected by both the Army's coastline radar and the Navy's surveillance system.

The military immediately sent naval vessels to deal with the incident. The crew members and the boat were brought to a military port in Yangyang, Gangwon Province, early Sunday morning.

They were quoted as telling investigators that their boat had crossed the NLL, the de facto maritime border between the two Koreas, due to "navigation error."

"The crew said they 'lost direction' and cited a 'navigation mistake,'" a JCS official told reporters.

While one crew member was clad in a military uniform, it remains unconfirmed whether he's an active-duty soldier, the official added.

When ordinary North Korean fishing boats cross the sea border into the South, the military here usually drive them away. This time, however, the authorities towed the vessel, as it was believed to belong to the military.

The South's military came under heavy public criticism over its handling of a North Korean wooden boat that crossed the East Sea border last month.

Carrying four men, it crossed the NLL undetected and docked at the South's port of Samcheok in Gangwon Province. Of them, two were sent back to their home country later, according to their wishes. The remaining two expressed their desire to defect to the South and have been going through due procedures required for such defectors, the Ministry of Unification said.

During the peak squid fishing season this year, a far greater number of North Korean fishing boats violated the NLL, according to the JCS. Between May 31 and July 14, some 380 North Korean boats were expelled for illegal fishing south of the maritime border.

In order to better crack down on illegal fishing, the military has beefed up surveillance of the waters around the inter-Korean border, officers have said.