The municipality of Boryeong, a South Chungcheong Province city 190 kilometers south of Seoul, said a total of 1,810,753 people visited the 22nd version of its mud festival held on Daecheon Beach.

The nationalities of foreign visitors, mostly from North America and Europe in the previous years, have been more diversified to include more from Southwest and Southeast Asia, Africa, South America and Oceania, according to the local government. 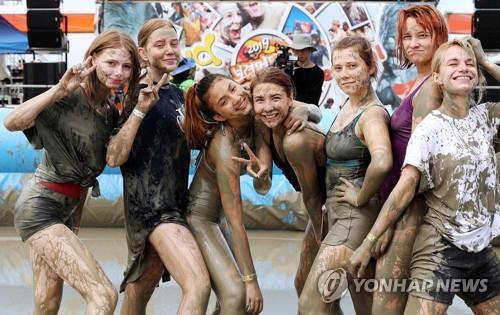 The number of visitors to the festival last year reached 1.83 million, including 298,100 people from abroad.

"Rain fell in Boryeong for seven days during the 10-day festival period. Despite such difficult circumstances, more than 1.8 million visitors came, having again proven the Boryeong Mud Festival's fame as a global festival," a city official said.

The official attributed the success of the festival to a nighttime opening, introduced this year for the first time, and colorful K-pop performances. On July 25-26, the festival stayed open at night, drawing thousands of people to a large mud bath and other facilities for mud-related experiences.

Nighttime performances held throughout the festival were also popular with visitors. 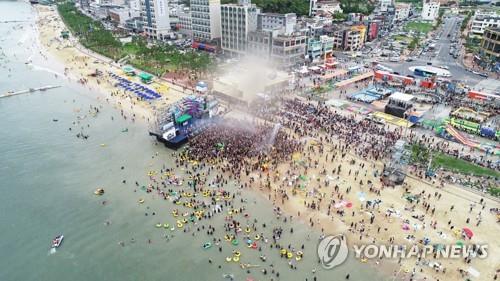 "This year's Boryeong Mud Festival provided a lot of fun and good memories to many tourists and citizens. We will prepare newer and more enjoyable programs for next year," Boryeong Mayor Kim Dong-il said.

Boryeong is famous for its wide mudflats formed along the western coast, with its high-quality mud that is rich in minerals and known to help prevent skin aging. Since 1998, the central South Korean city has organized the mud festival as part of efforts to promote its natural resources among international tourists.