SEOUL, July 29 (Yonhap) -- South Korea's health ministry said Monday that the graphic warnings on cigarette packs will be enlarged starting next year in the latest move to curb smoking.

The Ministry of Health and Welfare said it plans to adopt a revised law that mandates expanding the warning images from the current 50 percent of the package's exterior to 75 percent.

Currently, the size of the warning photos must cover more than 30 percent of both sides of cigarette packages with warning text making up an additional 20 percent.

The revision -- which mandates 55 percent of the warning photos and another 20 percent with warning text -- comes amid growing calls to send a stronger message discouraging smoking.

In 2016, South Korea began requiring tobacco companies to put pictorial warnings on the upper part of both sides of cigarette packs, with the graphic images being changed every 24 months.

Currently, 105 countries have adopted such pictorial warnings, with 43 of them mandating over 65 percent of tobacco packages to be covered with disturbing pictures that depict the consequences of smoking.

Data from the Organization for Economic Cooperation and Development (OECD) put the smoking rate of South Korean men aged 15 and older at 38 percent in 2017, much higher than the OECD average of 23 percent. 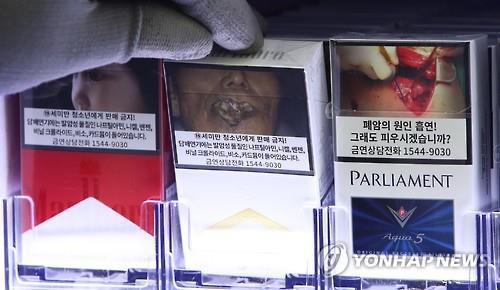 S. Korea to enlarge warning images on cigarette packs in 2020

S. Korea to enlarge warning images on cigarette packs in 2020