SEJONG, July 29 (Yonhap) -- South Korea is still ready to hold talks with Japan over export curbs that are likely to be expanded further this week, although Tokyo has again rejected a call for a meeting to resolve the matter, Seoul's top trade official said Monday.

Japan is set to expand its controls on exports of key materials to South Korea this week by removing Seoul from a list of 27 nations granted preferential export procedures, following the July 4 implementation of curbs on the shipment of three key materials crucial for the production of semiconductors and displays.

"We are open to talks (with Japan) any time," South Korean Trade Minister Yoo Myung-hee told reporters here. She said her ministry proposed a meeting with her Japanese counterpart, Hiroshige Seko, on the sidelines of the Regional Comprehensive Economic Partnership (RCEP) ministerial conference slated for Aug. 2-3 in Beijing.

"But we received the reply that it is impossible (to hold the meeting) due to (Seko's) schedule," she said. 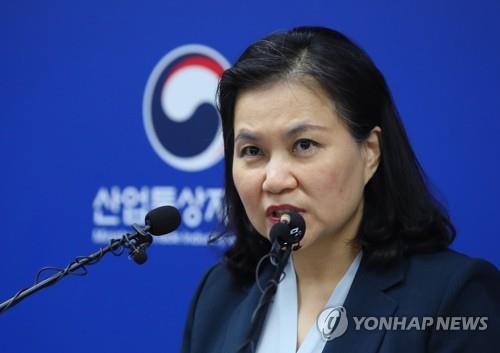 Tokyo claims its export restrictions are in response to Seoul's lax export control system on goods that can be diverted for military purposes by third-party countries, implying North Korea.

The South Korean government, however, believes the move is an economic retaliation against a Seoul court's ruling that ordered Japanese companies to compensate South Korean workers forced into labor during World War II.

Yoo said the Seoul government is preparing for Japan's imminent decision to remove South Korea from the so-called whitelist.

Meanwhile, businesspeople and government officials in the United States have said that a trade feud between Japan and South Korea should be resolved quickly as the move will hurt the global supply chain, according to Yoo.

The minister visited Washington last week to drum up support for its battle against Tokyo's export curbs and highlight that it would have a negative impact on not only Asian companies but U.S. firms as well.

"I emphasized that Japan's export restriction will give a significant impact on the global economy, including that of the U.S.," Yoo said, claiming Japan's move will leave a "dangerous" precedent for taking advantage of the two countries' economic ties to settle political issues.

Yoo said she asked the U.S. officials to do what is necessary to solve South Korea's trouble with the neighboring country, although the U.S. government has not yet expressed a will to directly intervene in the case.

But U.S. officials were basically on the same page with South Korea, and the U.S. commerce secretary also acknowledged the potential impact on its industries, according to Yoo.

The trade minister said South Korea will continue its talks with Washington to cope with the situation and make efforts to win support from the international community through various diplomatic routes.