SEOUL, July 29 (Yonhap) -- Chances are high that the top diplomats of South Korea and Japan could hold talks on the margins of a regional forum in Thailand this week, sources said Monday, amid concern Tokyo could take an additional retaliatory measure in a row over wartime forced labor.

Foreign Minister Kang Kyung-wha and her Japanese counterpart, Taro Kono, are set to attend a series of multilateral meetings involving the Association of Southeast Asian Nations (ASEAN) that will take place in Bangkok, mostly on Friday.

Their talks, if realized, are expected to be held before Tokyo holds a Cabinet meeting on Friday possibly to determine whether to take Korea off the "whitelist" of 27 countries given preferential treatment in purchasing Japanese "dual-use" products that can be diverted for military use.

"Due to a number of variables, it is hard to conclusively say (that the talks will be held), but it is true that the two sides share the view (that they should meet bilaterally in Thailand)," a source told Yonhap News Agency on condition of anonymity. 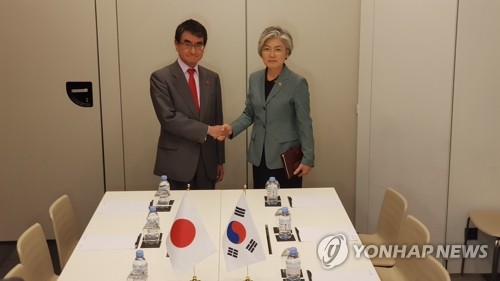 The envisioned talks between Kang and Kono would be their first face-to-face meeting since Japan imposed tighter restrictions on July 4 on exports to South Korea of three industrial materials vital to the manufacturing of chips and displays.

Seoul has criticized the export control measure as political retaliation for last year's Supreme Court rulings here against Japanese firms over wartime forced labor. It also argues that the measure runs counter to principles of free trade that Japan has long championed.

Both Kang and Kono are expected to arrive in Bangkok on Wednesday to attend bilateral events as well as Friday's multilateral forums, including the ASEAN Plus Three meeting, which includes South Korea, China and Japan; the East Asia Summit session and the ASEAN Regional Forum.

Given their busy schedules on Friday, they could meet bilaterally on Wednesday afternoon or the following day, observers said.

Seoul has been seeking to prevent Tokyo from taking additional steps to further strain bilateral relations, such as removing Seoul from a list of trusted trade partners, by appealing for U.S. mediation and drumming up international support.

Observers argue that South Korea, the U.S. and Japan could also meet trilaterally on the sidelines of the ASEAN meetings, as Washington has pledged to do "what it can" to support the efforts to ease tensions between its Asian allies.

Chances high for talks between top diplomats of S. Korea, Japan in Thailand this week: sources

Chances high for talks between top diplomats of S. Korea, Japan in Thailand this week: sources