Esper's trip comes as the United States reportedly wants Seoul to increase its contribution to the upkeep of 28,500 American troops stationed in its Asian ally's territory.

The new defense secretary, who took office last week, will leave Friday on a trip to Hawaii, Sydney, Auckland, Tokyo, Ulaanbaatar and Seoul, the Pentagon said in a press release.

During his stay in Seoul, Esper will meet with South Korean Defense Minister Jeong Kyeong-doo on Aug. 9 and discuss key issues related to their alliance, including the security situation on the Korean Peninsula, denuclearization and the transfer of wartime operational control, according to Seoul's defense ministry.

"Throughout his trip, Secretary Esper will meet with key leaders to reaffirm defense relationships and conduct bilateral and multilateral meetings with senior officials," the Pentagon said. 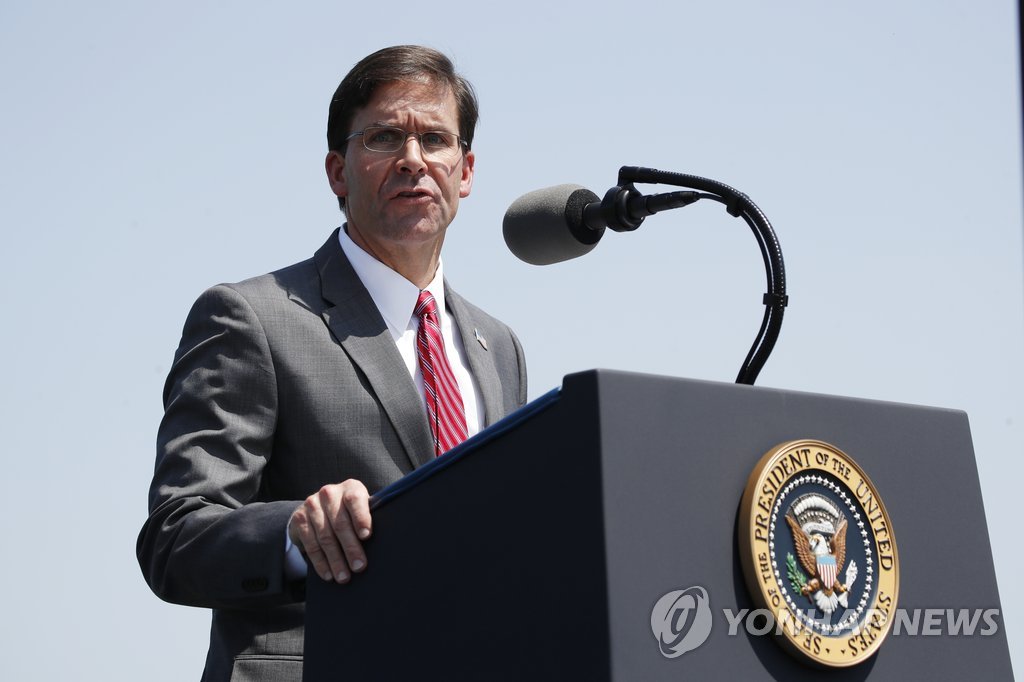 A South Korean newspaper earlier reported that U.S. National Security Adviser John Bolton asked Seoul during his trip there last week to raise its contribution to burden sharing to US$5 billion, an almost sixfold increase from the current level of 1.04 trillion won ($881 million), which itself is a 8.2 percent increase from last year.

The two sides are expected to start negotiations to renew their cost-sharing deal, known as the Special Measures Agreement, before the current one-year accord expires at the end of the year.

U.S. President Donald Trump has made it clear that he wants U.S. allies to pay more for the stationing of American troops, and the administration has been conducting a review of U.S. burden-sharing policy worldwide.

Speaking to the National Assembly on Tuesday, South Korean Foreign Minister Kang Kyung-wha said the allies share an understanding they will negotiate toward "fair cost sharing at a reasonable level."

Esper's trip to Seoul also coincides with U.S. calls on allies to join a maritime security initiative in the Strait of Hormuz, off the coast of Iran, amid heightened tensions between Washington and Tehran.

North Korea has warned that if the exercise goes ahead, it will affect the regime's decision on whether to resume working-level talks with the U.S. on dismantling its nuclear weapons program.