(ATTN: UPDATES throughout with details, quotes, photo)
By Lee Haye-ah and Oh Seok-min

The projectiles were fired at 2:59 a.m. and 3:23 a.m. from Yonghung, South Hamgyong Province, into the East Sea, and both of them flew around 220 kilometers at an approximate altitude of 25 km, the Joint Chiefs of Staff (JCS) said.

The projectiles, which flew at a top speed of Mach 6.9, appear to be a new type of short-range ballistic missiles, but more analysis is needed, the presidential office Cheong Wa Dae said.

"We are monitoring the situation in case of additional launches and maintaining a readiness posture," the JCS said.

In Washington, a senior U.S. official said he is aware of the North's latest launches.

"We are aware of public reports of additional missile launches from North Korea today," the official told Yonhap News Agency. "We continue to monitor the situation and are consulting closely with our South Korean and Japanese allies."

Friday's launches came just two days after the North fired two projectiles that it claimed was from a new multiple launch rocket system. South Korea and the U.S. said the projectiles were short-range ballistic missiles.

After last week's launches, the North said it sent a "solemn" warning to South Korea over its planned military exercises with the U.S. and purchase of high-tech fighter jets from the ally.

"What North Korea fired today showed flight patterns similar to those launched on Wednesday, and the South Korean and the U.S. intelligence authorities see them as short-range ballistic missiles, given their trajectories and flight speed," a Seoul military officer said.

Russia's Iskander, in general, moves at a speed of around Mach 6 and 7, while the North's 300-mm multiple rocket launcher system shows a far slower speed of about Mach 4, the officer said, adding that South Korea and the U.S. are looking into what North Korea claimed and the photos it released to exactly identify the type of weapons it launched this week.

In the run-up to the combined exercise with the U.S., the South Korean military is set to ramp up surveillance and vigilance in case of further moves by North Korea, according to military sources.

The allies plan to stage the command post exercise starting on Monday for about five days. They then are scheduled to hold joint sessions for about 10 days aimed at testing South Korea's operational capabilities for the envisioned transfer of the wartime operational control from Washington to Seoul, the sources said. 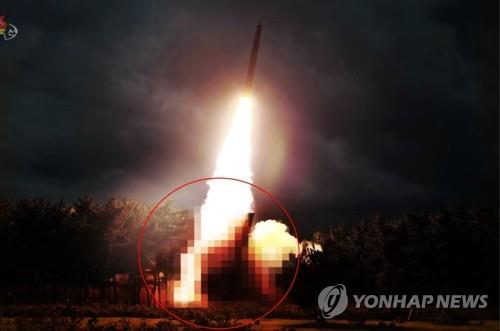 The launch did not pose a threat to North America, one official was quoted as saying, adding it was unclear how many projectiles had been launched.

At the White House, U.S. President Donald Trump insisted he had no problem with the launches because there had been no agreement with North Korea on short-range missiles.

Trump and North Korean leader Kim Jong-un had agreed during their inter-Korean border meeting on June 30 to resume working-level talks on denuclearizing the regime.

"I think it's very much under control," he told reporters. Asked if he can still continue denuclearization talks with Kim, Trump said, "Oh, sure, because these are short-range missiles."

"We never discussed that. We discussed nuclear. What we talked about is nuclear," he said.