SEOUL, Aug. 2 (Yonhap) -- Japan's decision to remove South Korea from a list of trusted trading partners is sending their already frayed ties into a tailspin, with little chance for a breakthrough in sight, experts said Friday.

The move also sparked concern that the worsening relations between Seoul and Tokyo could negatively affect security cooperation between the two American allies at a time when North Korea has been launching a series of missiles.

In a widely expected move, Japan's Cabinet approved a bill revoking the preferential status for South Korea as an export destination of sensitive materials that can be diverted for military use. It will likely take effect later this month after the subsequent due process.

The removal of South Korea from so-called whitelist of 27 countries is seen as the second retaliatory measure by Tokyo after its July 4 imposition of tighter restrictions on exports to Seoul of three key chemicals used for semiconductor and display production.

Under the measure, Japanese exporters will need individual authorization, rather than fast-track approval, for exports of around 1,120 dual-use items to South Korea. It raises concerns about significant delays and disruptions to shipments, which will be detrimental to both Japanese and Korean firms.

"There's little room for diplomacy at this stage, with the decision bound to bring serious repercussions for both countries," Chin Chang-soo, a senior researcher at the Sejong Institute, said. "We could see a dramatic buildup of fresh anti-Japan sentiment from the public, exacerbated by foreseeable setbacks our companies would suffer from the removal in the coming months." 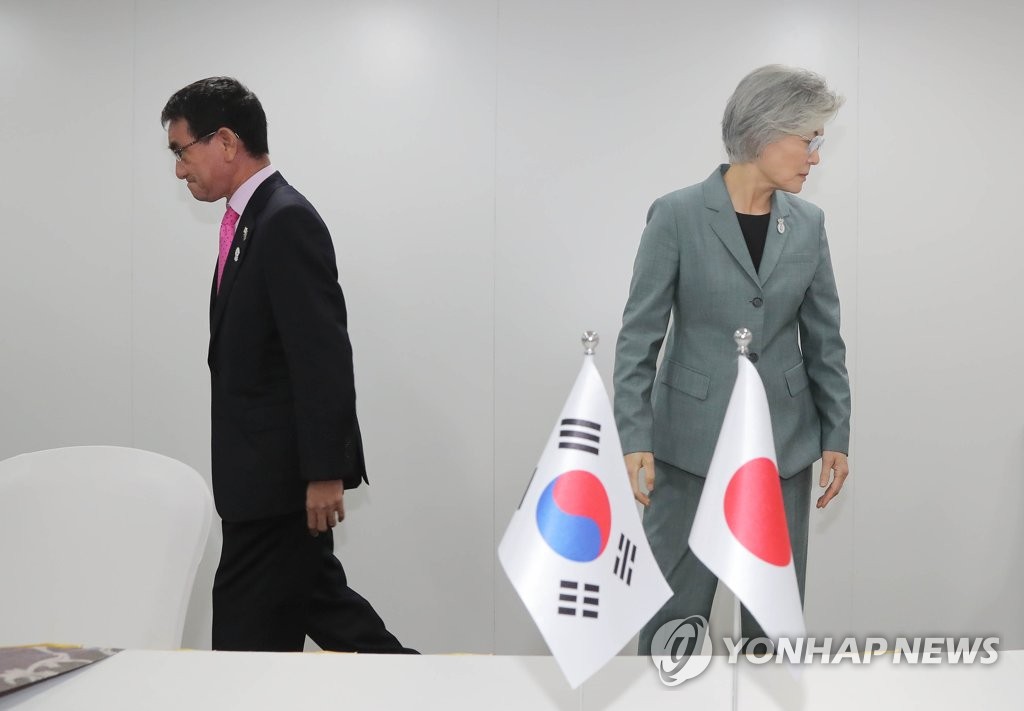 The row began after South Korea's Supreme Court made two separate rulings in October and November last year in favor of Korean victims of forced labor under Japan's 1910-45 colonial rule of the Korean Peninsula.

The court ordered Nippon Steel & Sumitomo Metal Corp. to pay about US$88,000 each to four plaintiffs and Mitsubishi Heavy Industries Ltd. to pay up to $134,000 to 10 people. Neither of them has abided by the rulings.

Japan has strongly objected to the rulings, saying all reparation matters relating to the colonial period were settled under a 1965 treaty that normalized their bilateral ties. Under the agreement, Tokyo provided Seoul with a $300 million in grants -- about $2.4 billion in today's money -- and $200 million in low-rate loans.

Last month, lawyers for the plaintiffs requested a South Korean court to allow them to auction off local assets of Mitsubishi in South Korea so as to cash them out for compensation. The court has frozen the assets after upholding the plaintiffs' request.

Japan has claimed the export curbs are unrelated to the forced labor issue but few believe it.

"Tokyo has become increasingly upset that Seoul did not comply with the dispute settlement procedures as stipulated in the 1965 accord," Nam Chang-hee, a professor at Inha University, said.

Japan suggested to Seoul early this year the formation of an arbitration panel involving a third party to resolve the forced labor issue. Seoul refused to comply, and instead proposed in June creating a joint fund with contributions from companies from both sides to compensate the victims. Japan immediately rejected it.

"For Japan, following the South Korean top court's decisions runs the risk of facing a flurry of litigation from other potential plaintiffs, one after the other. They're determined not to go down that road," Nam said.

More than a dozen similar cases are pending at South Korean courts involving about 70 Japanese companies, according to foreign ministry sources.

Up to 725,000 Koreans are estimated to have been sent by the Japanese military to work in mines or shipyards during World War II.

"There is underlying fear among the Japanese leadership about Korea's growing economic status, from a nation that once received aid from them to an Asian economic powerhouse. We could say that Japan has begun to treat Korea as a rival," he said. 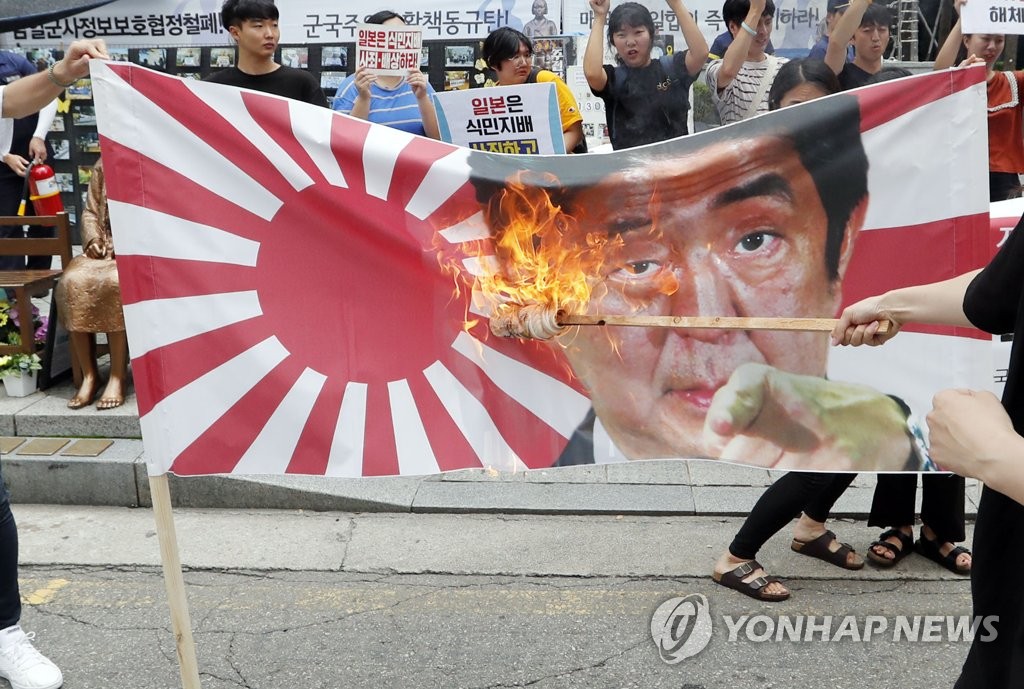 According to government and International Monetary Fund (IMF) data, Japan's per-capita gross domestic product (GDP) stood at $933 in 1965, about nine times that of South Korea. As of last year, South Korea recorded $32,000, equivalent to 78 percent that of Japan.

In an effort to find a way out of the row, experts suggest that the government of President Moon Jae-in consider making a moderate shift in its stance on the forced labor issue, possibly through finding ways to indirectly engage in the compensation process.

"The forced labor issue is what started all this in the first place. So what's the most important, basically, is to focus on that problem and come up with a solution," Lee Won-deog, a professor at Kookmin University, said.

"'An eye for an eye' doesn't give us solutions to any of these problems," he said.

Resolving the row with Japan is also vital for moving the peace building process on the Korean Peninsula and the North's denuclearization talks forward, given that trilateral cooperation with Japan and the United States is key to achieving such goals, according to experts.

"We need Tokyo's constructive role in dealing with the North's nuclear issue and pursuing dialogue in a peaceful manner. Taking the dispute to an extreme and letting it drag on won't help us get what we need," Lee added.

Experts shared the view that the diplomatic chill is inevitable for some time, with the future of security cooperation hinging on the fate of a bilateral military intelligence-sharing pact, known as the General Security of Military Information Agreement (GSOMIA).

South Korea has hinted at the possibility of scrapping the 2016 pact, aimed at sharing intelligence to better cope with threats from North Korea, if Japan pushes ahead with the delisting of South Korea as a trusted trading partner.

The pact is supposed to be renewed automatically every year unless either side expresses intention to terminate it. The two countries have until Aug. 24 to notify each other if they have intention to end the deal.

The mention of the pact has apparently caught U.S. attention as security cooperation between its two Asian allies is important for Washington in maintaining a firm defense posture against North Korea's nuclear and missile provocations, and keeping an assertive China in check.

Seoul has sought Washington's help in defusing the tensions. The U.S. has reportedly called for its two Asian allies to consider signing a "standstill" agreement to buy time to negotiate a solution. Japan has denied having received such a request from Washington.

Reuters reported Thursday, citing a senior U.S. government official, that the U.S. expressed concern over Japan's move, warning of negative repercussions for both countries "if it leads to a downward spiral, a tit-for-tat."

In a nutshell, forestalling further aggravation is now of the essence, according to experts.

"Both sides should contemplate, with cool-heads, what we can do so as to not make things worse," Chin of the Sejong Institute said. "Because if we don't, there will be no exit strategies."