The typhoon was moving northwest at a speed of 25 kilometers per hour from about 1,310 kilometers east-southeast of Kagoshima, Japan, as of 9 a.m., the Korea Meteorological Administration (KMA) said.

Francisco was classified as "small" with a central pressure of 990 hectopascals (hPa). The maximum sustained wind speed near its center was 86 kilometers per hour or 24 meters per second.

It is then forecast to be about 70 kilometers north-northeast of the southwestern city of Jeonju at about 9 a.m. Wednesday before exiting the peninsula toward the East Sea near Sokcho, Gangwon Province, according to weather officials.

But they said Francisco could be somewhat weakened by relatively lower water temperatures in the ocean and friction from land areas in Japan and South Korea. 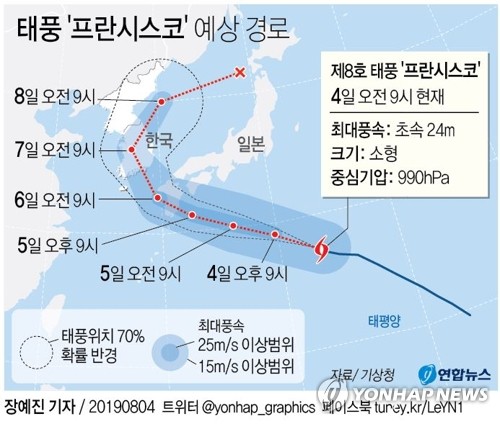