SEOUL, Aug. 4 (Yonhap) -- Samsung Electronics Co.'s Galaxy Note 10 phablet, which will be showcased later this week, is expected to post sales similar to that of its predecessor, industry watchers said Sunday.

The figure hovers below the 10 million units posted by the Galaxy Note 8 back in 2017.

An official from Counterpoint Research said the Galaxy Note 8 was able to post strong sales due to the suspended sales of its predecessor, the Galaxy Note 7, whose production was suspended due to battery problems.

The success of the Galaxy Note 10, meanwhile, is especially crucial for Samsung Electronics, as the company suffered a slump in its mobile business in the second quarter.

Industry watchers said Samsung may face hurdles in promoting the new phablet due to the lengthening smartphone replacement cycle. Some customers are also expected to wait until the showcase of the Galaxy Fold scheduled for September, they added. 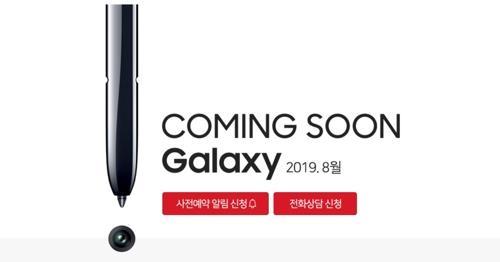 Sales of Galaxy Note 10 to be similar with predecessor: Counterpoint

Sales of Galaxy Note 10 to be similar with predecessor: Counterpoint