The joint drills will begin Monday with a computer-simulated command post exercise (CPX) to cope with any emergency on the Korean Peninsula and last for half a month, according to the authority.

After the CPX, the allies will spend the remaining 10 days intensively verifying Seoul's capabilities for its envisioned retaking of wartime operational control (OPCON) of its troops from Washington.

But many watchers say the joint military drills could prompt further provocation from the North.

The allies have scrapped or scaled down large-scale joint military drills -- Key Resolve, Foal Eagle and Ulchi Freedom Guardian -- following the inter-Korean summit at the border village of Panmunjom in April 2018 and the U.S.-North Korea summit in Singapore in June that year. They launched the new Dong Maeng exercise in March as a replacement for their springtime Key Resolve and Foal Eagle exercises.

But Pyongyang has denounced the new exercise as a violation of what was agreed on during the summits. On July 26, North Korea said the two short-range ballistic missiles it fired the previous day were a "solemn warning" against Seoul's planned military exercises with the U.S. and its purchase of high-tech fighter jets from the ally. The North later fired off four more short-range projectiles in just over a week.

The allies will ramp up their surveillance and vigilance in case of additional launches from the North during the joint drills, according to military sources here. 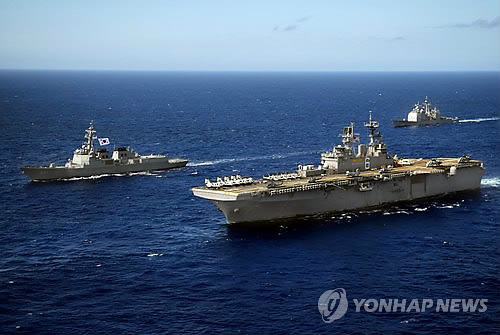