SEOUL, Aug. 5 (Yonhap) -- South Korea has had no discussions with the United States on the possible deployment of U.S. intermediate-range missiles on its soil, nor does it plan to do so, the defense ministry said Monday.

Some media outlets have speculated that South Korea could be one of candidate sites for U.S. missiles, after Washington pledged to deploy them in Asia and elsewhere to maintain deterrence after withdrawing from an anti-missile treaty with Russia.

"Our government did not have any official discussions with the U.S. on the possible introduction of intermediate missiles (on South Korean soil). We have not internally reviewed the issue and have no plan to do so," defense ministry spokesperson Choi Hyun-soo told a regular briefing.

"As of now, I believe that (the matter) is not among agenda items for the upcoming defense ministers' talks," she said, citing the meeting between South Korean Defense Minister Jeong Kyeong-doo and the U.S. Secretary of Defense Mark Esper slated for Friday in Seoul.

The allies have said the deployment is aimed at better countering evolving missile threats from North Korea. 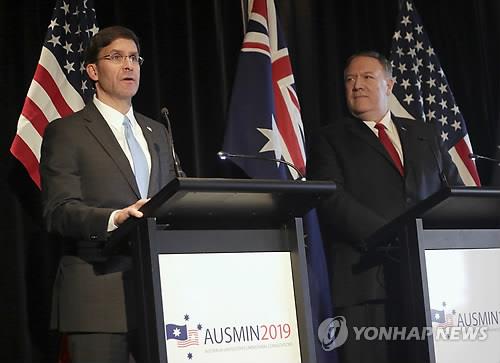 Last week, the U.S formally pulled out of the Intermediate-Range Nuclear Forces (INF) treaty with Russia and vowed to begin testing new missiles and deploy them around the world.

En route to Sydney on Friday, Esper told reporters that the U.S. "would like to" deploy intermediate-range missiles in Asia and that he would prefer to do so within "months."

Then in a press conference Sunday, the Pentagon chief said, "We now are free, if you will, to develop that range of weapons -- 500 kilometers to 5,500 kilometers -- that have not been available to us from a ground-based deterrent posture," noting that its exit from the treaty was a result of Russian noncompliance, according to a transcript available at the State Department website.

"So I think to the degree that allowing us to design and develop, test and eventually deploy systems, whether it's in Europe, whether it's in the Asia Pacific or elsewhere, gives us and continues that deterrent posture we want to deter conflict in any region, in which we deploy them in consultation with our allies and partners," he added.

The news conference was held jointly with Secretary of State Mike Pompeo and their Australian counterparts after an annual meeting of the foreign and defense ministers of the two countries, known as the Australia–U.S. Ministerial Consultations (AUSMIN).

During the press event, Pompeo also stressed that the possible deployment of such systems will be made with the consent of corresponding nations.

"We make decisions based on good decisions, mutual benefit ... much in the same way we work alongside with our great partners across multiple pieces of our collective security efforts," Pompeo said.

The two secretaries, however, did not give a direct answer to a reporter's question about whether such a plan would be aimed at China.

Esper was in Sydney as part of his weeklong trip to Asia. During the meeting Friday, Jeong and Esper plan to discuss major alliance issues, including the security situation on the Korean Peninsula and the envisioned transfer of wartime operational control from Washington to Seoul, according to Seoul officials.