WASHINGTON, Aug. 5 (Yonhap) -- U.S. Secretary of State Mike Pompeo has said South Korea, along with other countries, has a stake in securing shipping lanes off the coast of Iran.

In an interview with Sky News in Sydney, Australia, on Sunday, the top U.S. diplomat was asked about Washington's expectations when it comes to Australia's role in protecting vessels in the Strait of Hormuz.

Pompeo said the U.S. has asked more than 60 nations to join a U.S.-led maritime force in the Strait of Hormuz, an initiative that comes amid heightened tensions between Washington and Tehran.

"We want to make sure we have a comprehensive program so that Iran won't do something that will either risk that there'll be a kinetic conflict, which is something the United States certainly doesn't want, but second, that we protect the Australian economy and the Japanese economy and the South Korean economy, who each depend on goods being able to flow through that strait," the secretary said. 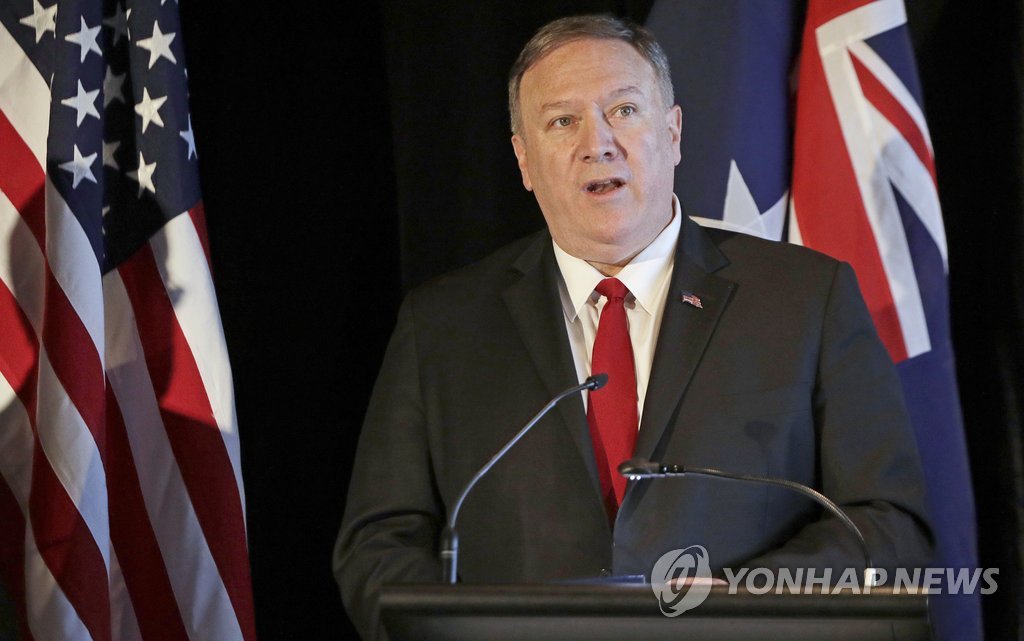 South Korea is reportedly considering sending an anti-piracy unit from off Somalia to the strait, although the government has maintained that nothing has been decided and that it continues to look into various options.

Pompeo also commented on Washington's new push to deploy conventional, intermediate-range missiles in Asia following its withdrawal from a missile treaty with Russia.

There is speculation South Korea, a U.S. treaty ally hosting 28,500 American troops, could be a candidate site.

"We will evaluate whether there are certain systems, certain missile systems that make sense to put in certain countries," Pompeo said. "These will be long, consultative processes as we work our way through them. But we'll never hesitate, if we think it's in the strategic interest of the United States of America and the strategic interest of an ally, to engage in a deployment, an operation for freedom of navigation or the deployment of certain systems."

He added that efforts to dismantle North Korea's nuclear weapons program are a priority task.

"The world still faces an enormous risk of nuclear proliferation," he said. "And so whether you see the work we're trying to do on North Korea to get them to denuclearize or work to ensure that the Islamic Republic of Iran doesn't get a nuclear weapons system, those are things that threaten a large number of peoples and can create enormous risk at any one moment in time."