WASHINGTON, Aug. 5 (Yonhap) -- The United States' new travel restrictions against foreign nationals who have visited North Korea follows its 2017 designation of the regime as a state sponsor of terrorism, a State Department official said Monday.

South Korea's foreign ministry announced earlier that effective Aug. 5, all South Korean citizens who had traveled to the North would face restrictions in entering the U.S. without a visa.

Under the Visa Waiver Program, South Koreans had been able to visit the U.S. using only the Electronic System for Travel Authorization (ESTA). 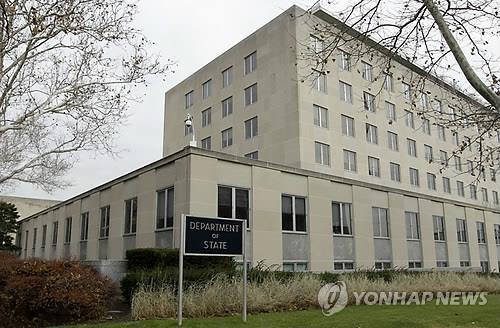 The new measure comes as negotiations on dismantling North Korea's nuclear weapons program have stalled and follows four tests of short-range ballistic missiles and projectiles by Pyongyang since late July.

"This change to the Visa Waiver Program is required by U.S. law," the official told Yonhap News Agency on condition of anonymity.

"When the United States designated North Korea as a state sponsor of terrorism in November 2017, it came within the scope of the Visa Waiver Program Improvement Act of 2015," he said.

In the months that followed, Trump embarked on a diplomatic campaign to denuclearize the country, holding three unprecedented meetings with the regime's leader, Kim Jong-un.

The travel restriction applies to all 38 countries that are part of the Visa Waiver Program, not just South Korea, the official said.

"Any Visa Waiver Program travelers potentially impacted by this designation will still be able to apply for a visa at U.S. embassies or consulates," he added. "This change does not ban travel to the United States or admission into the United States."

The official provided no explanation for why it took more than 20 months to implement the travel restriction after North Korea's designation.

He also gave no response when asked if the action related to North Korea's missile tests, and whether it could affect the resumption of denuclearization negotiations agreed by Trump and Kim at their inter-Korean border meeting on June 30.

South Korean law bans the country's citizens from traveling to North Korea unless they receive special permission from the government.