Opposition parties claimed that the worsening trade spat with Japan is attributable to the Moon Jae-in administration's poor diplomatic maneuvering. They also took issue with the government's approach toward Pyongyang amid a series of rocket launches in the North.

In a report to the House Steering Committee, the presidential office reaffirmed its resolve to cope resolutely with Japan's removal of South Korea from a coveted list of trusted trading partners last week and provide necessary support for affected local firms.

"The government will remove Japan from its whitelist of trusted buyers in order to strengthen export controls and take measures to ensure the safety of Korean nationals when it comes to tourism, food and waste," Noh Young-min, presidential chief of staff, told lawmakers.

On Friday, Japan's Cabinet approved a proposal to drop South Korea from the list of more than two dozen countries eligible for preferential trade treatment -- a follow-up to its July 4 imposition of curbs on exports of key high-tech materials to the South over a historical issue rooted in its colonial occupation of the peninsula before and during World War II.

With regard to the fate of a bilateral military intelligence-sharing pact, Noh said the government is "cautiously" reviewing it.

The DP has called on the government to abandon the General Security of Military Information Agreement (GSOMIA) with Japan in response to Japan's trade retaliation. Its potential negative impact on trilateral security cooperation with the United States is proving to be a dilemma, however.

The deal, signed in 2016, has been automatically renewed every year. In order to scrap it, either party is required to notify the other of its intention to do so 90 days in advance. The notification deadline is Aug. 24.

"The government will cautiously consider whether to renew it until Aug. 24. It is an issue that needs comprehensive consideration from the perspective of national interests," Noh said.

Rep. You Sung-yop of the minor opposition Party for Democracy and Peace said the current difficulty stems from the government's "immature and wrong" response to the trade issue with Japan.

Then the parliamentary defense committee adopted a resolution Monday condemning North Korea's development of nuclear weapons and firing of missiles.

Some raised concern that Japanese investors may withdraw their funds from Korean capital markets as part of Tokyo's retaliatory trade measures.

"Korea's financial fundamentals are different from what they were in the midst of the 1997-98 Asian financial crisis 20 years ago. So I think such a possibility is very low," Kim said.

The political parties also wrangled over the North's provocations.

Earlier in the day, North Korea fired unidentified projectiles, the fourth such launches in less than two weeks.

"We cannot make public the details of communication with North Korea, but we are fully delivering our stance (on concerns over its rocket launches)," said Chung Eui-yong, head of the national security office.

The North's move came a day after the South Korean president publicly called for economic growth based on inter-Korean cooperation and peace, saying it's a shortcut for South Korea to catch up with Japan economically. 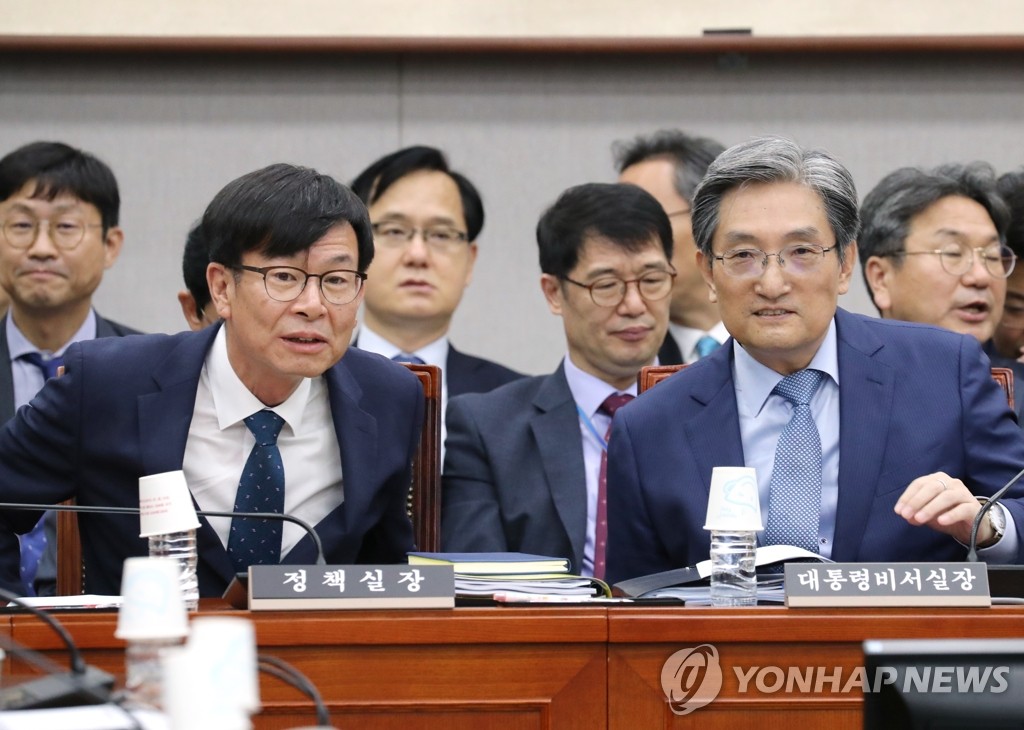