SEOUL, Aug. 6 (Yonhap) -- South Korea's weather forecasters on Tuesday revised the expected route of Typhoon Francisco, the eighth of the season, saying the small-scale typhoon will land on the country's southern coast between Busan and nearby Geoje Island late at night.

The Korea Meteorological Administration (KMA) said Francisco is forecast to make landfall in the Busan-Geoje region between 9 p.m. and midnight Tuesday before weakening to a tropical storm near Andong, a North Gyeongsang Province city, 268 kilometers southeast of Seoul, at 6 a.m. Wednesday. 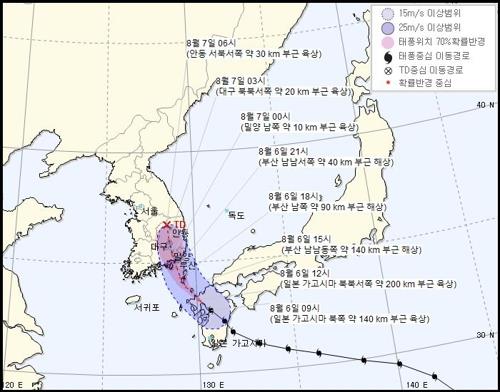 Earlier this week, the KMA issued forecasts that the typhoon would land on the southern coast near Yeosu, South Jeolla Province, on Tuesday night and pass through the middle of the Korean Peninsula before exiting South Korea via Sokcho, Gangwon Province, toward the East Sea.

According to the weather agency, Typhoon Francisco was moving northwest at a speed of 29 kilometers per hour from an area about 200 km north of Japan's Kagoshima as of noon. Francisco is classified as "small" with a central pressure of 996 hectopascals (hPa). Its maximum sustained wind speed near its center was 80 kph, or 20 meters per second.

Considering the expected route of the typhoon, the nation's eastern areas will likely be hit harder by rain and strong wind, the agency said.

Despite an earlier-than-expected extinction of Francisco, the KMA maintained its precipitation forecasts for most regions.

More than 200 millimeters of rain is forecast for the southern coast and the eastern coast of Gangwon Province, while Seoul, Gyeonggi Province, South Chungcheong Province and the southwestern provinces of Jeolla will receive 10 to 60 millimeters of precipitation. 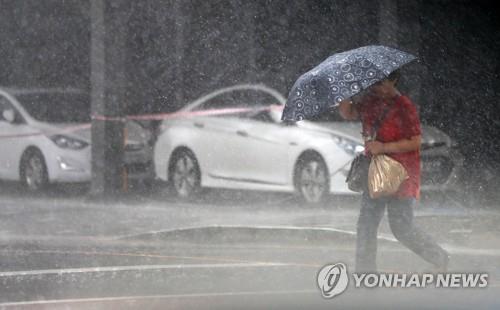 Heavy rain and strong wind began to affect Busan and its surrounding areas from noon, forcing the suspension of its port and vessel operations and the cancellation of nearly 100 flights scheduled to depart from Gimhae International Airport.