SEOUL, Aug. 7 (Yonhap) -- The 2019 Tour de DMZ, an international road cycling competition, will be held from Aug. 30 to Sept. 3 along roads close to inter-Korean border areas, the Ministry of the Interior and Safety said Wednesday.

The five-day competition, which will take place in areas adjacent to the Demilitarized Zone (DMZ), will be divided into three categories -- elite junior riders, amateur cycling enthusiasts and ordinary citizens -- the ministry said.

The International Youth Road Cycling Race, the primary event of this year's Tour de DMZ, is Asia's only competition endorsed by the Union Cycliste Internationale (UCI), the world governing body of cycling.

About 230 junior cyclists from 25 teams from South Korea and other countries will participate in the youth race. They will ride on a 510-kilometer-long route stretching from Goseong, a Gangwon Province town on the east coast, to Ganghwa, an Incheon district on the west coast, for five days. 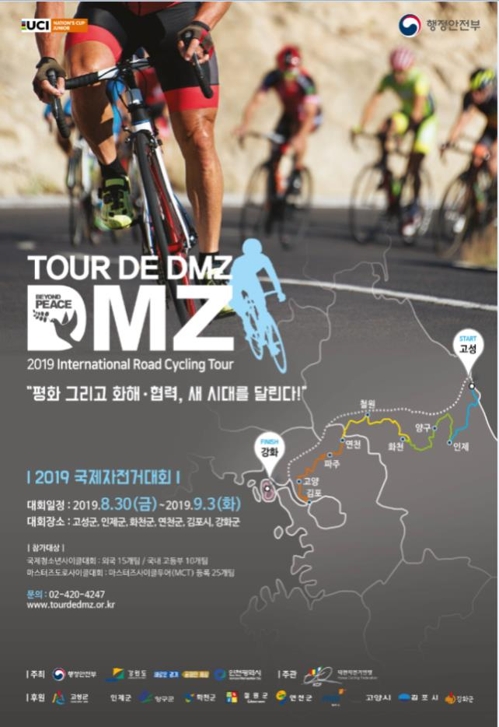 The DMZ, which is about 250 km long and 4 km wide, is one of the world's most heavily fortified borders, with the rival Koreas technically in a state of war as the 1950-53 Korean War ended in a truce, not a peace treaty. Since the signing of a comprehensive military agreement in September last year, the two Koreas have pushed for several tension-reducing measures.

The Masters Road Cycling Race for the sport's enthusiasts will take place from Aug. 31 to Sept. 1 on a 320-km section from Goseong to Yeoncheon, Gyeonggi Province. About 220 enthusiasts registered with the Korean Cycling Federation will compete in the race.

The first Tour de DMZ competition was held in 2016.