SEOUL, Aug. 8 (Yonhap) -- Around two years ago, nearly 20 years after she escaped from North Korea, Kim Young-sook (alias) was suddenly overcome by traumatic memories of life-or-death experiences, and she knew she couldn't handle it on her own.

Her memories of crossing the thinly-frozen Tumen River into China in 1998, having left her family behind in the North, and the constant fears she lived under while hiding in China for 10 years before coming to South Korea, haunted her as if all happened yesterday.

Adding to her problems were a car accident in 2016 and a rare disease that causes her constant pain.

"Sick and unable to work, things became tough. I felt like I was alone and thought 'What have I done to deserve this," she said in an interview with Yonhap News Agency. "I was getting angry and negative about everything."

She had nobody to talk to and her situation deteriorated to a point where Kim, 47, even thought about committing suicide. At the recommendation of one of her acquaintances, in 2017 she started to attend a psychological therapy program provided by the government.

Kim just talks with a counselor about her day-to-day life, relations with her teenage daughter and other challenges arising from her settlement in South Korea. She appreciates having somebody she can talk to, feeling that her life, which once seemed destined to disintegrate, appears to be returning to normal, albeit slowly.

"Now I have regained the reason for living," she said. "It is very reassuring to have somebody I can talk to. I am so happy that I have somebody who I can trust."

The psychological therapy session that she has been taking part in is part of the Korea Hana Foundation's program designed to support North Korean defectors' settlement in the South.

Around 90 counselors work to help a growing number of North Korean defectors, most of whom risked their lives to seek a new life here, leaving their families behind in the North, knowing that there would be little or no hope of seeing them again.

Many of them get frustrated as they find themselves with no one to depend upon when they are overwhelmed by such feelings as anxiety and depression. The public stigma of North Korea as poor and belligerent can deepen defectors' sense of isolation.

The South Korean government provides various forms of support to ease the process of settlement, including state subsidies to help find housing, get education and job training.

But mental health has never been a top priority in policy, despite an increasing number of North Korean defectors suffering from challenges that are invisible but can be even more daunting than their physical settlement.

According to a 2015 survey of around 2,000 North Korean defectors, 20.9 percent said they had thought about committing suicide, more than three times the rate of ordinary citizens.

In an apparent reflection of the growing demand, the foundation said it has provided psychological counseling services in a total of 97,959 cases since early 2010, making it the second most common form of assistance after job-related counseling. In 2018 alone, the number stood at 12,923, a steady rise from 10,524 in 2016 and 11,733 in 2017, respectively. 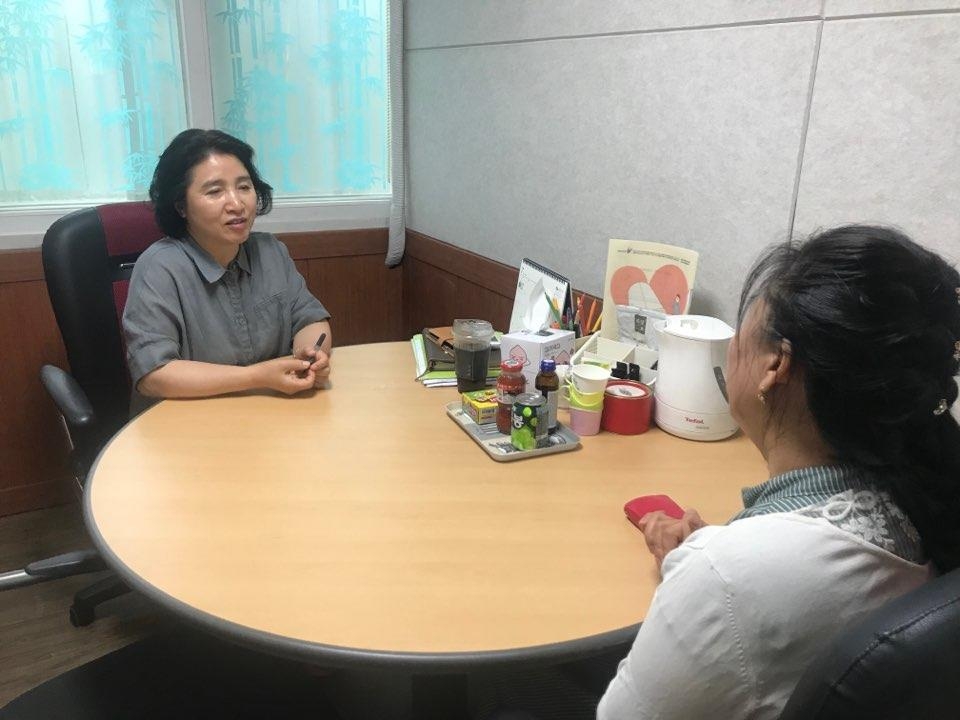 Chung Hye-rim (alias), 51, another defector, considers one of the counselors at the center a life saver who helped pull her out of the traumas stemming not only from her escape from North Korea, but also the hardships she suffered while adapting to a new life in the South.

"Traumas caused by the life in China, the repatriation to the North and many life-or-death experiences are making it hard for me to live," she said. "In the settlement process in South Korea, I have come into conflicts with some people and also had to fight loneliness."

She wanted somebody to talk to and found someone at a mental therapy session that she has been attending in recent years. Now she shares many of her previously untold and private stories with the counselor, which she said is changing her life significantly for the better.

"It was such a heart-wrenching journey. The counselor has saved my life and I really appreciate her help," she said.

Park Kyung-hui is the counselor that she was referring to. Since 2015, the 57-year-old has helped North Korean defectors as a therapist at the Korea Hana Foundation.

"When they come to South Korea, the first two to three years are important for their physical settlement," she said. "After that, the things that have stayed in their subconscious start to come up in their minds."

"Also, eight or nine of ten North Korean defectors think that they are discriminated in the South and looked down on as 'second-class' citizens, though they do not talk about those issues publicly," she said.

She said that helping the North Korean defectors recover their self-esteem is the most important task in her counseling work.

"Among other things, their self-esteem level is quite low," Park said. "They do not know it, nor do they feel it since they are so nervous in getting adjusted to a new life. Once they get used to a new life here to some extent, the contempt, disregard, oppression and poverty and others explode all at the same time."

She said that her job is not about prescribing medication but about listening to and sympathizing with them, while possibly providing helpful advice that could set them on a right path with a suitable objective.

The most difficult part of her job, however, is not how she advises them but whether she can manage to bring them to her office.

"Most important in counseling North Korean defectors is to make them sit down first. Most of them are not willing to acknowledge that they have a problem. Acknowledging that they do is the beginning of everything," she said.

Park currently counsels 13 North Korean defectors and meets three to four of them every day. She sometimes finds it so hard to listen to their gut-wrenching experiences and memories day after day that she seeks counseling herself.

"I get counseling every once in a while," she said. "One reason is to improve my counseling capacity. If you provide the wrong advice, it could be like giving them a knife. In an extreme case, you need to provide more professional counseling."

"I also need counseling for myself. Listening to their agony and tumultuous life journeys every day is sometimes a hard thing to do," she added. "However, the two, in a way, are inter-related. I can provide high-quality counseling only when my mental status remains stable."

She expected that demand from North Korean defectors for more tailored and professional therapy will increase going forward as their number is on the steady rise and, as they adapt, the type of their problems is also becoming more various.