SEOUL, Aug. 7 (Yonhap) -- North Korea's bold hurling of missiles over the capital area all the way into the East Sea this week suggests the regime has completed development of a new ballistic missile that would pose fresh security challenges to the region and beyond, experts said Wednesday.

The two missiles, tested Tuesday, are believed to be a North Korean version of Russia's Iskander ballistic missile, codenamed KN-23. They were fired from an airfield in the southwestern county of Kwail and flew about 450 km across the peninsula before splashing into waters off the east coast.

Calling the weapons "tactical guided missiles," the North's Korean Central News Agency (KCNA) reported on Wednesday that they flew "across the capital area and the central inland region to precisely hit the targeted islet in the East Sea."

It is quite unusual to carry out a missile test over the skies of populous areas, according to experts. The missiles passed through the skies near its capital city of Pyongyang and the major port city of Nampo at a maximum altitude of 37 km and a top speed of Mach 6.9.

"Given that North Korea had the missiles cross the capital areas, the primary purpose of the latest test seems to be to verify the reliability of this new weapon and to show off its prowess," Kim Dong-yup, a professor at Kyungnam University's Far East Institute, said.

"It appears to be in the final testing stage, and it would not take long before the missile is deployed for full operation," he added.

Photos of its leader Kim Jong-un with key party and military officials, including Ri Yong-gil, chief of the general staff of the North's Korean People's Army, and Premier Pak Pong-ju, could also indicate that North Korea completed the development of the new weapon. 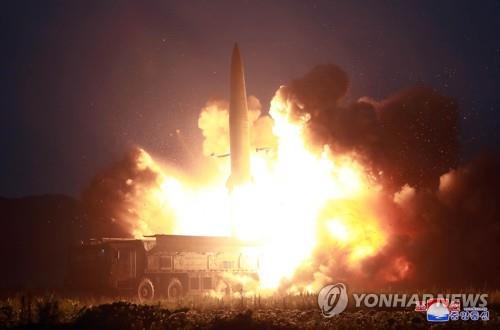 North Korea first showed off its version of Iskander during a military parade in February 2018 and first test-fired it on May 4 when it resumed its major weapons tests after a 17-month hiatus.

Since then, the regime is believed to have tested the missile by firing it at least three more times -- on May 9, July 25 and Aug. 6 -- by tuning its range and altitude, according to military officers.

Their flight distances varied from around 240 km to 600 km, with maximum altitudes between 37 km and 50 km.

The series of tests in recent weeks appear to be designed to "get this missile fully operational," U.S. National Security Adviser John Bolton said on Fox News on Tuesday.

The North also launched two similar projectiles on both July 31 and Aug 2 off the east coast, according to South Korea's Joint Chiefs of Staff (JCS). But the North said the launches were of a "newly developed large-caliber multiple launch guided rocket system."

Russia's Iskander has several versions, and detailed specifications of Pyongyang's Iskander were not known. But the recent tests prove that the ground-based missile puts the entire Korean Peninsula within its range.

"Pyongyang appears to design the missile with a maximum flight range of around 700 km, and it can be adjusted according to the weight of the warhead," professor Kim said.

"By firing the missile from its western region, different from the previous ones that were launched from eastern towns, North Korea appears to maximize its menacing messages to South Korea and the U.S.," Kim Yeoul-soo, an expert at the Korea Institute for Military Affairs, said.

After watching the latest launches, Kim Jong-un was quoted by the KCNA as saying that its military action is "to send an adequate warning" to the ongoing joint military exercise between Seoul and Washington.

If fired from the eastern coastal town of Wonsan, the new missile can reach such Japanese regions as Fukuoka and Hiroshima, Kim added. 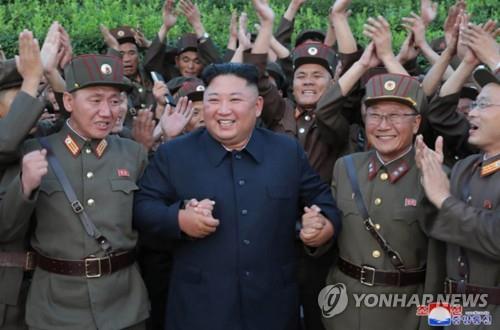 North Korea had been believed to have Scud-B/C/ER short-range ballistic missiles with an estimated range of up to 700 km.

What raises fresh concerns over the new type of weapon is that its flattened and complicated trajectory could make it hard to detect and intercept, experts noted.

After the July 25 test, the JCS confirmed that the missiles showed a complicated trajectory, different from a general parabolic one, as they did the so-called "pull-up maneuver" in the final phase, which, according to experts, is not fully covered by South Korean radar systems.

Some also point out that the KN-23 missile would neutralize the THAAD system that is designed to aim at targets flying higher than 50 km.

Guarding against exaggeration of its threats, however, the South Korean military has said that its missile defense system is capable of responding to the weapon, while vowing to continue to beef up its capabilities against evolving missile threats from North Korea.

"The recently tested short-range missile is within the interception range of our assets ... And the pull-up maneuver is nothing new, as we already developed and have employed the related technology that guarantees a much higher degree of precision," Defense Minister Jeong Kyeong-doo said during a military forum on July 31.

"We will further boost our self-defense capabilities, and relevant projects have been underway without a hitch," he said, citing those for securing military surveillance satellites and more Aegis-equipped destroyers as well as upgrading its Patriot-based systems.