SEOUL, Aug. 7 (Yonhap) -- Asiana Airlines Inc. said Wednesday it will suspend flights on the Busan-Okinawa route later this month due to falling demand stemming from a trade row between South Korea and Japan.

A series of Tokyo's export curbs on Seoul has sparked a "Boycott Japan" campaign here against travel to the neighboring country and purchases of Japanese products.

Asiana said flights departing from the southeastern port city of Busan for Japan's southern resort island of Okinawa will be suspended starting Aug. 23.

"The flight suspension is an adjustment of supply resulting from declining demand," Asiana said. 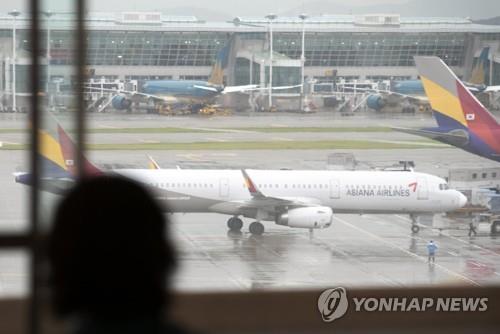 Late last month, Asiana said it will cut the number of flights on its routes to Japanese destinations, such as Fukuoka, Osaka and Okinawa, starting in mid-September.

Asiana is not alone. Korean Air Lines Co., the leading full-service carrier, has said it will suspend three regular flights per week on the Busan-Sapporo route starting Sept. 3.

In addition, low demand for travel to Japan has prompted local low-cost carriers to reorganize their flight schedules on some routes to Japanese cities.

"We will decide on whether to reduce additional flights to Japan or put reduced flights back on track in late October depending on market conditions," a company spokeswoman said.

Smaller rivals were quicker to respond to declining travel demand to the neighboring nation.

T'way Air suspended flights on the route between Muan Airport in southwestern South Korea and Oita of Japan on July 24. It will also stop flights on the Daegu-Kumamoto and Busan-Saga routes.

Eastar Jet has announced its plan to halt flights on the Busan-Sapporo and Busan-Osaka routes from September.

Anti-Japan sentiment resulting from Tokyo's export restrictions has dampened demand for trips to Japan. According to data from the Seoul government, the number of South Korean travelers to the neighboring nation sank 13 percent on-month to some 467,000 during the June 16-30 period.

The "Boycott Japan" drive started after Japan restricted exports of key materials to South Korea on July 4 in apparent retaliation over a spat surrounding wartime forced labor. Many Koreans were forced to work at Japanese factories and mines during Japan's 1910-45 colonial rule of the Korean Peninsula.

Last week, Tokyo raised the ante in the trade dispute by removing Asia's fourth-largest economy from its list of trusted trading partners.
(END)