SEOUL, Aug. 7 (Yonhap) -- U.S. President Donald Trump tweeted Wednesday that talks to get South Korea to increase its contribution to the upkeep of U.S. forces in the country have begun.

"South Korea is a very wealthy nation that now feels an obligation to contribute to the military defense provided by the United States of America. The relationship between the two countries is a very good one!" Trump wrote in a tweet.

He added, "South Korea has agreed to pay substantially more money to the United States in order to defend itself from North Korea. Over the past many decades, the U.S. has been paid very little by South Korea, but last year, at the request of President Trump, South Korea paid $990,000,000." 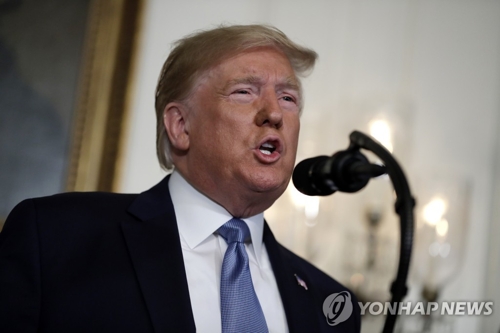 Trump's remark came ahead of U.S. Defense Secretary Mark Esper's visit to Seoul this week for talks on pending alliance issues, including Washington's demand for Seoul to increase its contribution to the cost of keeping U.S. troops here.

Shortly after Trump's tweet, Seoul's foreign ministry said that official negotiations on the Special Measures Agreement (SMA), a bilateral deal to share the cost for the stationing of the 28,500-strong U.S. Forces Korea have yet to begin.

"It is inappropriate to comment on remarks on the social media of a foreign head of state," the ministry said in a statement. "The 11th SMA negotiations have yet to be officially launched."

The ministry also pointed out that Seoul and Washington agreed to conduct discussions on the new SMA in a "reasonable and fair" way when U.S. National Security Adviser John Bolton visited Seoul last month.

"(The two sides) plan to discuss concrete details (of the cost sharing) in the 11th SMA negotiations," the ministry said.

"(South Korea) is seeking to pick its new chief negotiator and form a task force (for the negotiations) through an internal government review," it added.

The allies are expected to hold the 11th SMA talks in the coming months, as the current one-year deal is set to expire on Dec. 31.

Washington is expected to demand a hefty rise in Seoul's contribution, given that Trump has pressured American allies to jack up their defense costs.