BUSAN, Aug. 8 (Yonhap) -- Transshipment cargo handled at South Korea's largest seaport of Busan fell for the first time in 29 months in July amid a trade dispute between the United States and China, industry data showed Thursday.

It marks the first on-year contraction since February 2017.

The southeastern port processed cargo totaling 1.86 million TEUs in July, up 2.7 percent from a year earlier. A 6.4 percent rise in export and import freight helped offset the decline in transshipment cargo. 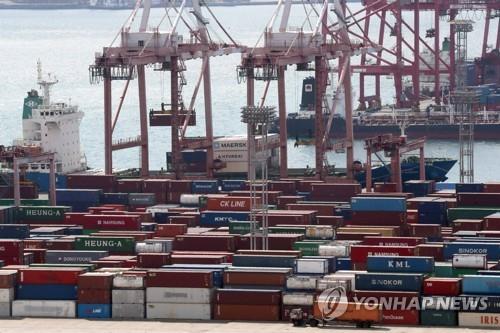 Growth in Busan's transshipment cargo handling began to lose steam sharply in May, when it gained a mere 1.9 percent from a year ago. In June, the volume edged up 0.4 percent.

In the first four months of this year, the on-year growth rate averaged 7.1 percent.

The July decline was attributed mainly to a fall in cargo volume due to tit-for-tat tariff impositions by Washington and Beijing. The world's two largest economies account for nearly 50 percent of transshipment cargo handled at Busan.

Industry watchers raised the possibility that Busan's transshipment cargo handling may shrink further down the road as the U.S. has decided to slap additional tariffs on Chinese exports.
(END)