SEOUL, Aug. 8 (Yonhap) -- From remarks on the status of defense cost-sharing talks with South Korea to the size of American troops here to Seoul's agreement to pay "substantially more" to station them, U.S. President Donald Trump's apparently erroneous claims are stirring confusion.

In an abrupt tweet on Wednesday, Trump said that talks have begun to discuss the renewal of a deal with Seoul to share the cost for the upkeep of the U.S. Forces Korea (USFK) and that the ally has agreed to jack up its spending to defend against North Korean threats.

But Seoul's foreign ministry said that official negotiations have yet to open, let alone any agreement on its contribution to the USFK for next year. It stressed that both have agreed to conduct their negotiations in a "reasonable and fair" way.

Analysts said that Trump's social media remarks involving erroneous facts could be part of his negotiation tactic to sharply raise stakes, put his opponents off balance and wring more concessions out of them. 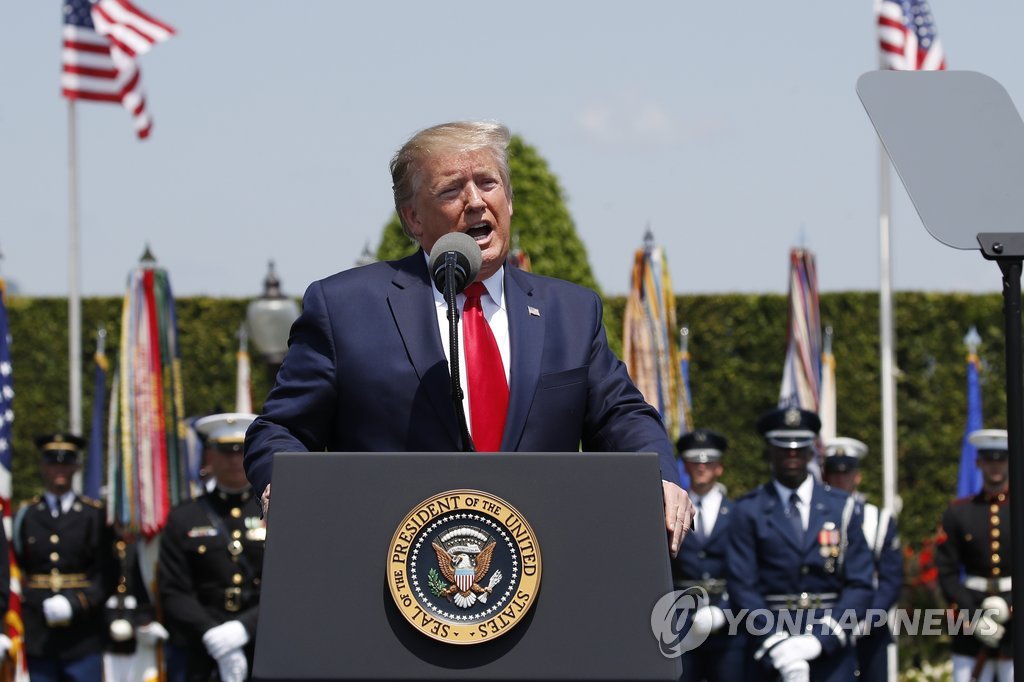 But Trump's use of unfounded -- sometimes exaggerated -- data to back his negotiation position could chip away at America's reputation for reliability, though they may play well to the domestic audience ahead of his reelection battle, the analysts said.

"Trump seems to be using wrong facts to put pressure on a negotiating partner and make (what he wants from the negotiation) a fait accompli when there isn't any done deal yet," Park Won-gon, a professor of international politics at Handong Global University, said.

"Although U.S. presidential remarks will be recorded and go down in history, it has been like that for years since he took office, and it makes us even believe as if such a tactic had become America's external policy method," he added.

Concerns over Trump's push for the ally's greater contribution rose last month when local media reported that Washington had tentatively decided to request that Seoul pay US$5 billion to support the USFK for next year, more than a fivefold increase from this year.

In the latest tweet, the U.S. president said that at his request, South Korea paid "$990,000,000" last year. But the exact amount of Seoul's financial contribution was 960 billion won (US$791 million) last year.

Under this year's Special Measures Agreement (SMA), the bilateral cost-sharing deal, Seoul agreed to pay 1.04 trillion won, an increase of 8.2 percent from the previous year. As the deal is set to expire at the end of this year, the allies are expected to launch SMA negotiations soon.

Also on Wednesday, Trump triggered further confusion, doubling down on his claim that Seoul has agreed to pay "a lot more money."

"South Korea and I have made a deal. They've agreed to pay a lot more money toward the United States," the president told reporters before boarding the Marine One on the South Lawn of the White House.

He went on to say, "We've got 32,000 soldiers on South Korean soil, and we've been helping them for about 82 years. And we get nothing. We get virtually nothing."

Trump's number for the USFK troop level is also at odds with the official data. The number of American troops stands at 28,500, though it could vary when troops flow in and out of the peninsula during military exercises or in times of the transition among rotational forces.

His remarks on Washington's alliance support for Seoul for "82 years" also puzzled many here.

The South Korea-U.S. alliance was born during the 1950-53 Korean War, though their mutual defense treaty was signed shortly after the war. The U.S. military presence on the peninsula can date all the way back to 1945 when its soldiers came to Korea to disarm Japanese forces south of the 38th parallel.

Trump's claim that the U.S. gets "virtually nothing" is questionable.

Particularly in the construction of Camp Humphreys 70 kilometers south of Seoul -- one of America's largest overseas military bases -- South Korea shouldered more than 90 percent of the cost for its land and construction.