During the defense talks held in Seoul, Esper also asked for South Korea to play a role in the U.S.-led coalition to safeguard the Strait of Hormuz, according to officials.

The two defense chiefs "reaffirmed their commitments to supporting their diplomatic efforts for the complete denuclearization of the Korean Peninsula and the establishment of a lasting peace," according to their joint press release.

Stressing the importance of continued and close coordination for such efforts, the two sides agreed to maintain communication as well as their steadfast alliance, which is crucial for the stabilization of the surrounding regions, the statement said.

The nuclear negotiations between Washington and Pyongyang have been stalled since the no-deal Hanoi summit between U.S. President Donald Trump and North Korean leader Kim Jong-un in February.

Despite Washington's proposal for working-level talks, North Korea has rather threatened to seek "a new way" if South Korea and the U.S. go ahead with their combined military exercise and has intensified its display of weapons in recent weeks by test-firing newly developed short-range ballistic missiles.

On Monday, the allies kicked off their summertime exercise, which is meant to test South Korea's capabilities for the conditions-based transition of wartime operational control of combined forces from Washington to Seoul.

Acknowledging progress toward the OPCON transfer, Jeong and Esper vowed to discuss the results of the initial operational capability (IOC) test during their Security Consultative Meeting slated for later this year, according to the joint statement.

At the beginning of the talks, Esper said, "(The U.S.) will remain resolute in the enforcement of the U.N. Security Council resolutions until the North engages in the complete, verifiable, irreversible denuclearization of the Korean Peninsula."

Noting that the allies are ready to defend themselves and create space for diplomacy, the Pentagon chief reiterated America's willingness "to engage diplomatically with North Korea to make progress on all commitments made in the Singapore joint statement to achieve those ends," citing the announcement after the first summit between Trump and Kim in Singapore in June 2018.

Calling the Indo-Pacific region the U.S.' priority theater, Esper also said that his visit to South Korea reaffirms the "ironclad" alliance, which is "the linchpin of peace and security" on the Korean Peninsula and in Northeast Asia.

"I hope that the South Korean and the U.S. defense authorities continue to cooperate closely to overcome such difficulties while maintaining the strong combined defense posture," Jeong said. 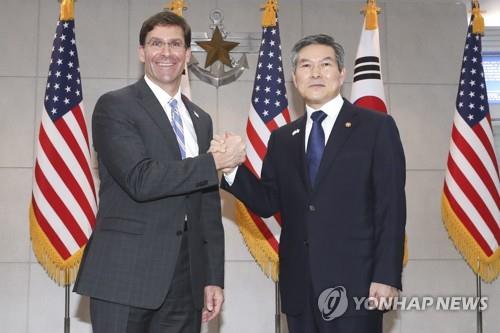 During the meeting, Esper called for South Korea's cooperation in ensuring the freedom of navigation in the Strait of Hormuz. In response, Jeong said that the government is reviewing diverse options to safeguard the sea lane, according to the officials.

"Esper spoke of the issue in broad and general terms rather than making specific requests," the official said. But it is the first time that a high-level U.S. official has directly delivered Washington's stance to the South Korean side.

The U.S. has been struggling to garner support from its allies to forge a coalition in waters off Iran against the Middle East country's military activities there.

In order to guarantee the safety of the country's oil tankers using the sea lane, South Korea has been reviewing various options, one of the most probable being to send its anti-piracy Cheonghae Unit from off Somalia to the strait, according to sources.

U.S. allies have given mixed responses to America's plan. Britain and Israel have announced their willingness to participate, while Germany has declined and Japan has taken a cautious stance.

Despite mounting speculation that Esper would raise the sensitive issue of cost-sharing for the upkeep of the 28,500-strong U.S. Forces Korea during the talks, however, the officials here said it was not among their agenda items.

Other sources added that the Pentagon chief did not bring up the issue when he met with Foreign Minister Kang Kyung-wha and President Moon Jae-in on Friday.

The U.S. has intensified its pressure on South Korea to increase its financial contribution. President Donald Trump said Wednesday that South Korea is "a very wealthy nation that now feels an obligation to contribute to the military defense" provided by the U.S.

Under this year's agreement, Seoul agreed to pay 1.04 trillion won (US$915 million), a 8.2 percent on-year increase. With the deal set to expire at the end of the year, the two sides are expected to begin fresh negotiations soon.

Stressing the importance of the three-way security cooperation involving Japan, Esper voiced support for the General Security of Military Information Agreement (GSOMIA) between Seoul and Tokyo amid the possibility of its abrogation following increased enmity between the two neighbors over Japan's export curbs on Seoul.

"Minister Jeong said that the government will make a decision after considering the relevant circumstances in a comprehensive way," the official said.

Esper is in South Korea for a two-day visit that started Thursday on the final leg of his five-nation trip to the Asia-Pacific region. He also visited Australia, New Zealand, Japan and Mongolia.

Esper, who served as the secretary of the Army, was sworn in as the 27th secretary of defense last month after seven months of turmoil surrounding the top job at the Pentagon following James Mattis' resignation from the post in December. 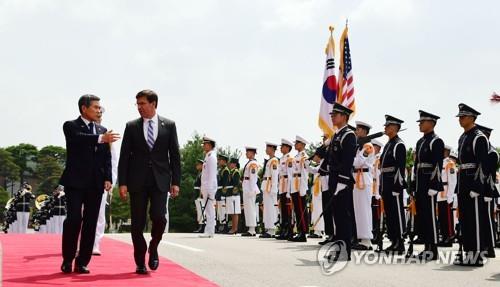