SEOUL, Aug. 10 (Yonhap) -- North Korea again fired two more projectiles believed to be short-range ballistic missiles into the East Sea on Saturday, South Korea's military said, the latest in a series of saber-rattling moves against the joint exercise between Seoul and Washington.

The projectiles were fired at 5:32 a.m. and 5:50 a.m. from its eastern coastal city of Hamhung in South Hamgyong Province into the East Sea, and both flew around 400 kilometers at a maximum altitude of 48 km and a top speed of around Mach 6.1, according to the Joint Chiefs of Staff (JCS).

"We see high chances of additional launches, as North Korea is now carrying out summertime drills and the combined exercise between South Korea and the U.S. is underway," the JCS said in a release.

"Accordingly, we have been closely monitoring the situation, while maintaining staunch military readiness," it added. 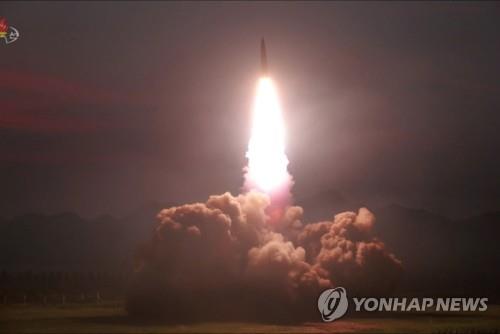 Such military moves appear to be a show of force against the combined military exercise between South Korea and the U.S., the presidential office Cheong Wa Dae said, adding they also aim to test the capabilities of its newly developed short-range ballistic missiles.

Seoul and Washington kicked off their summertime military exercise Monday, with the main part of the computer-based "Combined Command Post Training" set to begin Sunday for a 10-day run.

Though the allies have said the exercise is defensive in nature, and is meant to test South Korea's operational capabilities for the conditions-based transition of wartime operational control from Washington to Seoul, the North has denounced it as a rehearsal for invasion and has repeatedly demanded its cancellation and threatened to seek "a new way" rather than engagement.

"Such a series of launches are feared to heighten military tensions on the Korean Peninsula, and we urge North Korea to stop such activities," Cheong Wa Dae said in a release.

In Washington, a senior U.S. government official said the U.S. is aware of the latest firing and is monitoring the situation closely with the allies.