The Korean won hit the lowest level to the U.S. dollar in over three years amid a growing appetite for safer assets and mounting concerns over an economic slowdown.

Investor sentiment was spooked by the mounting trade war between the world's two largest economies.

Major indices dropped more than 1 percent in the U.S. on Monday due to growing fears that the American-Sino trade feud could turn the economic slowdown to a recession. Goldman Sachs said it no longer expects a trade deal before the 2020 U.S. presidential election.

"The trade row is definitely negative for the Korean market that relies on exports," said Seo Sang-young, an analyst at Kiwoom Securities.

Analysts said emerging geopolitical risks, such as pro-democracy protests in Hong Kong that led to an airport shutdown, as well as primary election results in Argentina that triggered a massive sell-off in the peso, also appear to have dampened investor sentiment.

"The worsened situation in Hong Kong could impact all Asian markets since Hong Kong is considered a financial hub in the region," said Park Sang-hyun, an analyst at Hi Investment & Securities.

Most large-cap stocks fell across the board.

"The combination of the American-Sino trade war and protests in Hong Kong propelled traders to sell the local currency," said Kim Doo-un, an analyst at KB Securities.

Bond prices, which move inversely to yields, closed higher. The yield on three-year Treasurys fell 3.2 basis points to 1.150 percent, and the return on the benchmark five-year government bond dropped 4.6 basis points to 1.177 percent. 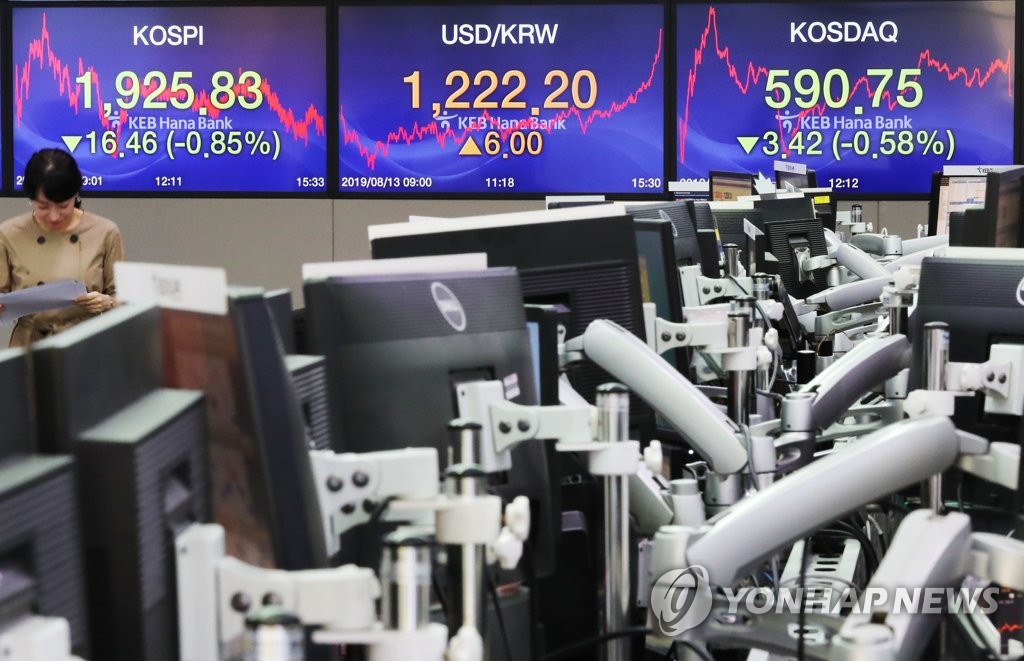